Guwahati: Following a representation to the Registrar General India and State NRC Coordinator pointing out the discrepancies and infirmities in the NRC process by the Prabajan Virodhi Manch, Convener, Upamanyu Hazarika on September 7, 2018, the Registrar General on Thursday had addressed the same to the State NRC Coordinator Prateek Hajela and accordingly sought a report on the infirmities and discrepancies.

As per the representation submitted by the Convener, it basically highlights Shortfall in numbers of those excluded, compared to official estimates of infiltrators, Border districts, showing the maximum increase in the population having least exclusion in NRC, far below the state average of 12.15%.

The letter by Hazarika also mentioned that inclusion of a large number of declared foreigners by Foreigner Tribunals, in thousands in Dhubri alone, where paperwork and field verification reports gave all clear for inclusion in draft NRC.

Also, he mentioned that inclusion of persons, whose cases pending before Foreigner Tribunals, required to be excluded. As per Hazarika’s report, Dhubri alone includes 4354 cases where paperwork and field verification reports gave all clear for inclusion in draft NRC.

Meanwhile, the Registrar General based on the report directed the State NRC Coordinator Prateek Hajela to examine the representations carefully keeping in view the discrepancies and infirmities in the NRC updating process as reported by Upamanyu Hazarika on the priority basis. 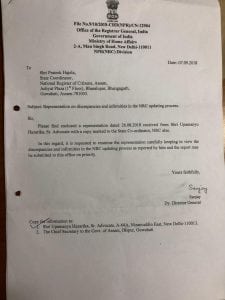