Guwahati: Alike every other citizen, several actors and singers came out together to cast their valuable votes on the third phase of general elections to the Lok Sabha today in Guwahati.

Speaking to the media, actress Barsha Rani Bikhoya after casting her vote at Uzan Bazaar LP school said, “I am here to cast my vote alike other citizens of India, this is a democratic right and responsibility of every Indian national. Happy to see the youth are coming out in numbers to cast their votes which is a good thing. People of India are awakened! Therefore the politicians should also have to awake themselves as well.”

Actress Barsha also mentioned that the people of Assam need a strong public representative who can raise their voice on the key issues at the Parliament. 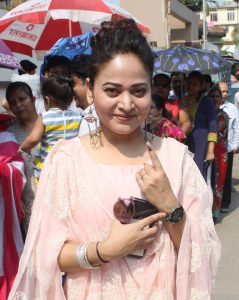 Speaking to the media, Assam’s heartthrob and singing sensation Zubeen Garg said, “I am really happy to cast my vote here today, normally I remain out of station due to various programmes and shows, and therefore, I generally fail to cast my vote. I want a genuine and good candidate should come out as the public representative from this general election.” 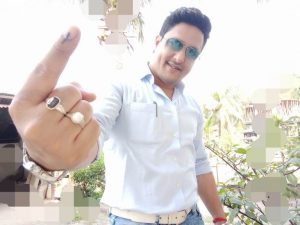 Zubeen also appealed to the people of Assam to cast their valuable votes. “Everyone should come out and vote for their favorites candidates,” added Zubeen Garg.