Guwahati: The Union Minister of Women, Child Development Smriti Zubin Irani visited Guwahati to discuss on a number of issues and also reviewed the progress of Poshan Abhiyan in Assam.

During the meeting, the Union Minister deliberated solutions to make Assam a leading state in the fight against malnutrition among children and women. She also reviewed the implementation of various welfare schemes of her ministry in the state. 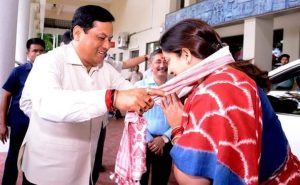 The Union Minister also expressed her displeasure for 11 percent implementation of the budget scheme, following the review, the union minister gave a deadline of 11 months to resolve all the issues and viewed on timely completion of the works.

POSHAN Abhiyan is a central government scheme that focuses on reducing stunting, under-nutrition and anaemia in women and adolescents through direct cash transfers. It is a huge step towards eradicating malnutrition and also serves as an added income for families. 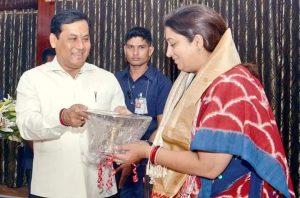 The Union Women and Child Development minister said both the central and the state government were committed to make Haryana by eradicating malnutrition.

"I held discussions with Chief Minister (Khattar) on the progress of Poshan Abhiyan campaign in Haryana," Smriti said.

"The Centre and the state government are committed to make Haryana a healthy state by removing the problem of malnutrition in children and women," she added.

Irani further said that she would soon call upon the chief minister to discuss the issue of women safety and education in the state.

It may also be mentioned that 'Poshan Abhiyaan' aims to bring down stunting of children in the age group of 0-6 years from 38.4 per cent to 25 per cent by 2022.