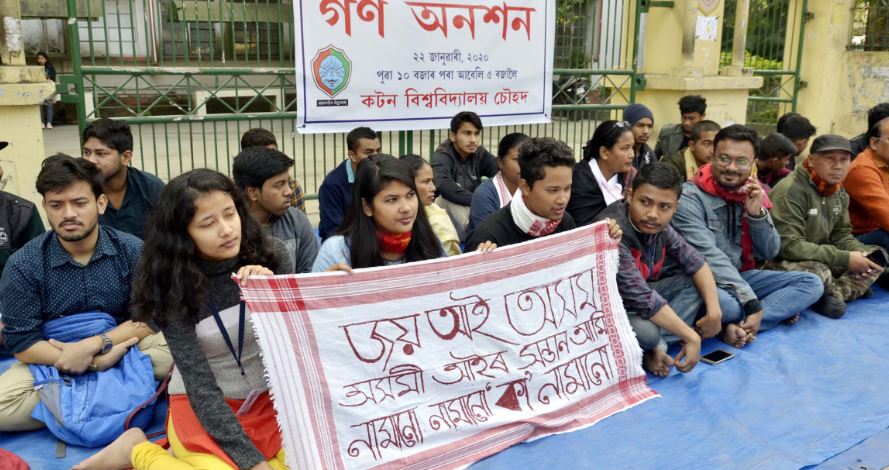 GUWAHATI: Demanding scrapping of the CAA (Citizenship Amendment Act) the students of Cotton University staged gana anasan (mass fasting) from 10 am to 5 pm on Wednesday when the SC hearing of the PILs against the CAA was underway.

Talking to the media, a student of Cotton University Hirak Jyoti Bora said that they were staging the hunger strike with two points. Bora said, “We will never accept the CAA, and we trust the Supreme Court that it’ll give the hearing in favour of the people of Assam and India. However, we’ve come to know that the Centre is asking for more time. Now the question is if they’re not yet ready to justify why they’ve issued the Gazette notification. It’s totally a political agenda.”

Another student of Handique Girls’ College, Kasturi Chutia said that their stand is clear that the students’ community will carry on its movement against the CAA. She said, “We’ve faith in the Supreme Court. However, I want to say that the condition of Assam is quite different from that of any other states of India. So the people should understand the condition of the Northeast India as well as Assam, including its political, historical background that Assam has gone through. We’ve lost so many representatives of the future generation, and we can’t lose more.”

Participating in the hunger strike, artiste Ajoy Phukan said, “We’ve assumed earlier that the government will not be able to justify the reason behind implementing the CAA and thus they’ll make it a long process while hatching a conspiracy to place the Bangladeshis in different parts of Assam. It’s a political agenda to achieve victory in the election, so the people Assam need to be aware of their policy. We must be ready for a long struggle. Hence artistes, students and litterateurs will discuss it on January 24 at Xahitya Xabha Bhawan.”