These egregious tactics, used by companies like British American Tobacco, Imperial Tobacco or Indian Tobacco Company (ITC), Philip Morris (Godfrey Philips) are a clear violation of Section 5 and 6 of Cigarettes & Other Tobacco Products Act. Despite the prohibition on sales of tobacco products near educational institutions, numerous shops/vendors/points of sale sell & advertise tobacco products around schools.

Consumer Voice and Consumers’ Legal Protection Forum, Assam undertook this study in Guwahati, Jorhat and Dibrugarh. This study titled, “Big Tobacco Tiny Targets” was conducted to determine the extent of tobacco products being marketed and sold around schools in State. A total sample of 34 schools and 48 points of sale were closely surveyed during this study in Guwahati. Sharing the key findings of the study Advocate Ajoy Hazarika, Secretary, CLPF says nearly half of the vendors around schools sell tobacco products.

(Investigators observed 34 points of sale selling tobacco products out of the 48 surveyed around schools. Street and Mobile vendors were the most common form of vendors at 71% of the 34 tobacco points of sale observed.). 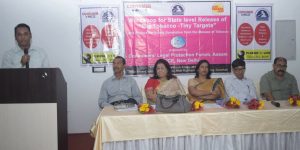