Home » INTERNATIONAL » Fly to work? This ‘Marvel Man’ is busy working on the dream 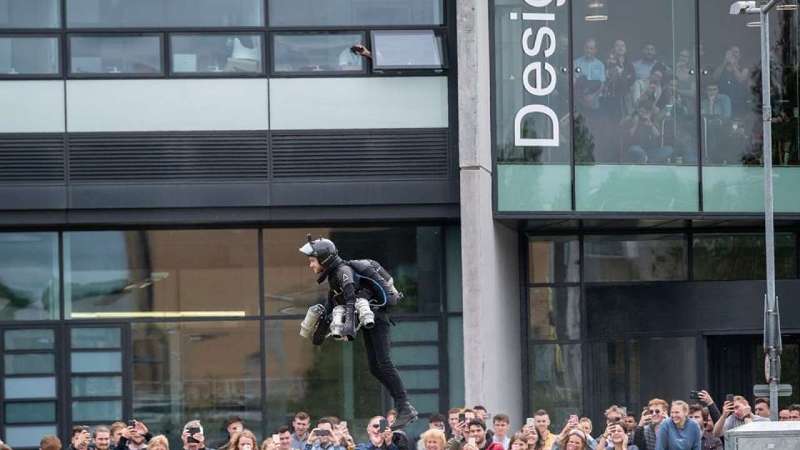 Nashville: Imagine going to the office flying at a speed of 50 km per hour. No traffic woes, no parking headache, and the journey are all-electric. No, we are not talking about Tesla CEO Elon Musk and his eccentric yet game-changing ideas for the future of transportation.

For the ‘Marvel Man’ Sam Rogers, who has now successfully demonstrated the flight with wearing a gas-turbine-powered Jet Suit over the river at nearly 80 km per hour, the whole idea is not to just provide entertainment and fun for the audience, but work on more lightweight and efficient parts and let the humankind fly safely from once place to another in the near future.

Rogers redesigned the Jet Suit that has set a Guinness World Record for speed in the field of human aeronautical innovation.

“Five turbojet engines spooling up on your body is a very visceral experience,” according to Sam.

A student of the UK-based Loughborough University, he is currently an additive design lead and jet suit pilot at Gravity Industries, founded by British inventor and entrepreneur Richard Browning in 2017.

The company is behind the “Daedalus Mark 1”, a jet pack that uses several miniature jet engines to achieve vertical flight. The kerosene engines are rated at 22 kg of thrust each.

“We augment the body and mind with a suite of patent-pending technology to enable unparalleled human flight,” Rogers said on the sidelines of the Dassault Systemes’ 3DExperience World conference here.

“It’s a great feeling, kind of like the Marvel superheroes, to wear the Jet Suit and fly,” said Rogers, who is setting up a flying race over a river with Jet Suit-wearing enthusiasts.

The intense 1,000bhp (brake horsepower) roar of a Jet Suit demonstration must be an amazing visual treat.

“The aim is an unparalleled human flight and mobility right in front of your eyes, leaving you inspired to question what else is possible for human creativity to achieve,” said Rogers.

Gravity has flown at over 60 events in 20 countries in the 18 months since its launch. The five-turbojet engine Jet Suit is 3D printed entirely in aluminum, steel, and nylon.

It has kerosene-fuelled turbines on the back and on the arms, each with 22kg of thrust, with the controls located inside the grip handles.

“After several iterations, the turbines on the arms and back is the optimal configuration,” said Rogers, adding that 3D printing is playing an ever-increasing role in the design and manufacture of such prototypes. The Jet Suit is available for $4,40,000 and the company has sold 10 such suits to the inventors. (IANS)