Moje Riba, one of the prominent martyrs of India's freedom movement,and one of the noble sons of the country, was a patriot and a kind human being who was always ready to help others. He was affectionately called as Aboh Nyiji, which means old father of all. His village people had made him Gaon Burah.

This great soul was born in the 1890's in the Daring Village (now known as Dari), in West Siang area. He was into cane business. He used to trade cane products to his Hindi-speaking friends across the huge, River Brahmaputra, in Dibrugarh. In Dibrugarh he heard about the freedom movement against the British Rule. He also got an urge to take a firm stand for his country.

He was motivated to join the freedom movement against Britishers. In an act of supporting the freedom struggle, along with the village representatives of the Daring village, Moje Riba gathered at Dirang and decided to go to Sadiya to render support. And, there, they met Gopinath Bordoloi and Lalit Hazarika. He was advised to join INC to work more and gather support for the party. Thus, he joined the Indian National Congress (INC). 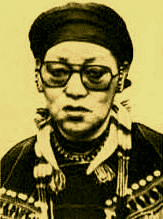 After joining INC, Moje Riba became the first INC President from Arunachal Pradesh. He lead the marches and his supporters in the path of the country's freedom. He has contributed in this freedom struggle in different ways.

For his sacrifices and contributions in the India's movement, he was conferred with Tamra Patra by the then PM of India, Smt. Indira Gandhi. It happened on the red letter day of the silver jubilee year of India's Independence Day i.e. on 15th August, 1972.

This great, lion-hearted soul left us on 1982 at his residence in Daring. His sense of patriotism, boldness in action will always inspire and motivate the generations to come.