Chhath Puja: Its History And Significance That You Need to Know

Chhath Parva, conjointly called Chhath puja, Chhath, Chhathi, Dala Chhath, and Surya Shasthi is a festival dedicated to the Sun god (Surya Bhagwan). The festival is mainly celebrated in Bihar and Uttar Pradesh, as well as the states, such as, Jharkhand, West Bengal, Orissa, Assam and Bhojpuri, and Maithili-speaking countries, like, Mauritius. Throughout the four long-days of Chhath puja 2018. Chhath puja 2018 will be celebrated between November 11-14, whereas the main puja will be observed on November 13-- devotees can worship Lord Surya. Throughout this puja, the setting sun is worshipped. Women observe this challenging fast of 36 hours since ages with consistent religion that Lord Surya will make all their wishes come true, if the ritual of offering ‘araghya’ to setting sun is done with complete devotion.

The significance of Chhath Puja 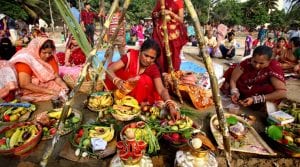 The festival is devoted to Lord Surya (Sun god), which people believe sustains life on Earth. Hindus believe that the early sunlight helps to cure many diseases and is a nice source of healing too. Chhath puja is performed to seek blessings from Lord Surya for a long, healthy and prosperous life. The festival is celebrated between the months of October and November. Chhath literally means “six” and the festival gets started just after the Govardhan puja, completing on the seventh day (Saptami - the paran/ parna day).

During Chhath puja, the setting sun is worshipped. Women observe this challenging fast of 36 hours since ages with consistent faith that Lord Surya will make all their wishes come true, if the ritual of offering ‘araghya’ to setting sun is done with complete devotion. Fasting is observed by lady folks or married women for the well-being of their sons and the happiness of family members.

It is said that the rituals of Chhatth puja could even start to the ancient era because it finds a mention in the Vedas. According to chhath.org, the Rigveda features hymns praising lord Surya and exemplifies similar customs. The custom conjointly finds a reference in the Mahabharatam -- one in the 2 major Sanskrit epics of ancient India, the other being the Ramayana -- in which Draupadi -- the most important feminine character in the Mahabharatam -- is delineated as perceptive the same rituals.

According to the poem, Draupadi and Pandavas -- the rulers of Indraprastha (today’s Delhi) -- performed the rituals of Chhath puja on the advice of noble sage Dhaumya. Through the flattery of Lord Surya, Draupadi not simply came out of all her troubles but also helped the Pandavas regain their lost kingdom.

The Hinduism or scientific history of Chhath puja dates back to the Vedic times. The rishis of yesteryears used this method to stay alive without any intake of food; they were able to get energy from sunlight. This was done by following the rituals of Chhath puja.

Another history reflecting the significance of Chhath puja is the story of Lord Rama. It is believed that Lord Rama and his wife Sita had kept fast together and offered puja to Lord Surya in the month of Kartik (in between October and December) in Shukla Paksha, during their coronation after returning to Ayodhya from 14 years of an exile. Since then Chhath puja became an important festival for Hindus.