Ladakh, a region in the state of Jammu and Kashmir, whose culture is closely related with British. Its July and there are harsh sunny days in Phyang Village in Ladakh, yet two huge artificial glaciers in the shape of stupas made with ice by the environment engineer Sonam Wangchuck still stand tall and strong.

In the dry desert of Ladakh, farmers can only depend on water from melting snow and glaciers. But in the recent years, there has been lesser or no snowfall during the winters. What about the water sources now?

These ice stupas provide sufficient water for the village so they can irrigate their farmlands before the glaciers start melting. When one’s next to the ice stupas one can hear the gentle dripping of water from the melting glacier, which flows down through a large pipe that is connected to the reservoir. Then the water is taken for irrigation of a large plantation area in the village. Wangchuk’s invention is seeking to resolve this conflict by making water available to the farms through artificial glaciers within the villages. He devised a way of creating this by freezing stream water during the winter in the form of ice towers up to 50meters high. He says that to develop this system, he got inspired from his fellow Ladakhi engineer (83) Chewang Norphel. Norphel created the heights of 4,000 meters and above, which was not within the farmers reach, but Soman found out a way to bring it closer to the villagers. 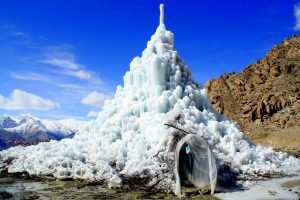 Sonam, one of the five people to win the 2016 Rolex Award, in November. As per him, the ice stupas need very little investment and effort. Due to the difference in height, the pressure gets built up and the water flows up and out of the pipes into sub-zero air temperatures. The water then freezes as it falls to gradually form an ice stupa. In the late spring, the melt-water is collected in huge tanks and later fed onto planted lands. 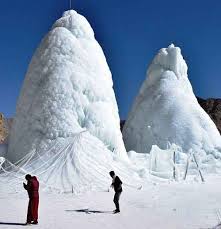 However, these stupas are not famous among everyone. The farmers of the village downstream said “They divert all the water of the stream from November for creating the ice stupas. This is quite dangerous for our farms. Tesering Motup, another farmer and head of the village, said they had opposed the diversion of the water and that they have taken the matter to the Leh district administration. The district administration for this is finding a solution, “we will constitute a committee of experts, which will include hydrologists, glaciologists, government officials. We are hopeful that concerns of both the parties will be taken care of,” said Sonam Chosjor, assistant commissioner revenue of Leh district.