After Bollywood Actress Sunny Leone, Manforce Condoms trolled Journalist Arnab Goswami saying “She is always on our mind as well”

Guwahati: After Bollywood actress Sunny Leone took to Twitter to respond to one of the leading National editors and prime time anchor Arnab Goswami's blunder in the ongoing heat of general elections to the Lok Sabha, 2019 ‘Counting day’ on his channel, Manforce Condoms, whose brand ambassador is Sunny Leone now trolls Arnab and also tweets a cheeky reply to the anchor.

Manforce condoms had tweeted the picture, after Bollywood Actress Sunny Leone tweeted, "Leading by How many votes ?????" trolling the anchor. 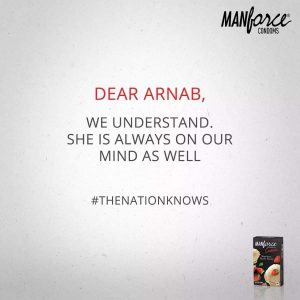 It may be mentioned that actress Sunny Leone who is now trending all over the social media platform after Arnab Goswami referred to Bharatiya Janta Party's Gurdaspur candidate and Bollywood actor Sunny Deol as Sunny Leone.

The video of the incident has gone viral and has provided a moment of laughs in the heat of the counting day.