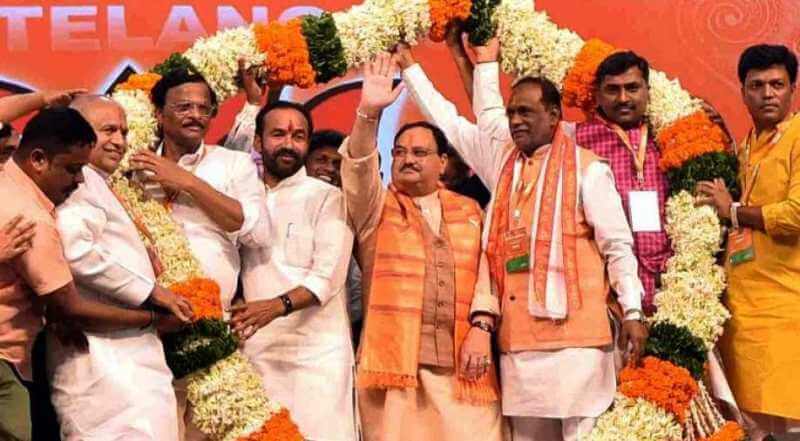 In a massive drive to join Bharatiya Janata Party, around 60 prominent members and leaders of the Telugu Desam Party (TDP) have joined the political party on Sunday. The membership drive took place in the presence of BJP working president JP Nadda.

Along with the top leaders of the TDP, thousands of party workers too have joined the BJP. Speaking on joining the party, former TDP leader Lanka Dinakar said, “It is a very, very good sign as far as the Telangana unit is concerned, as well as this positive sign which flows to Andhra Pradesh also.” Notably, Dinakar has also shifted to BJP in June earlier this year.

The former TDP leader added that thousands of TDP workers have joined the BJP in addition to whom, around 60 prominent national, state and district level leaders too have joined the BJP. He added that after the passage of Triple Talaq Bill and abrogation of Article 370, quite many political leaders are showing an interest in joining the BJP.

On the other hand, BJP working president JP Nadda said that the new national president will be selected before December 31.

Nadda further adds that the number of leaders joining BJP are around 70 and about 20% of those leaders are from the Congress. In addition to this, about 20,000-odd cadre have also joined the BJP. It is to participate in the membership drive that the BJP leader had reached Hyderabad on Sunday and left for Delhi on Monday.

“I did not know for almost 8 years I was suffering from Tuberculosis”: Amitabh Bachchan
ISRO to inject Chandrayaan-2 into lunar orbit on Tuesday between 8.30 am and 9.30 am