Chennai: In a highly laudable gesture in the interests of judicial accountability, Justice G R Swaminathan of Madras High Court, Madurai bench, had released data of the cases disposed of by him over past two years after assuming charge as HC judge on June 28, 2017.

As per media reports, Justice G R Swaminathan in a letter stating to the members of bar association had revealed that he disposed of a total of 21,478 cases with 18,944 cases as a single bench and 2,534 cases while sitting in division bench. 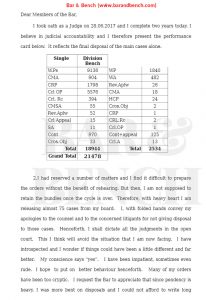 Justice Swaminathan also intimates that he has released this performance card as a measure of judicial accountability.

Further, he goes on to announce his intention to tackle case pendency more effectively and has also sought the assistance of the Bar towards this objective.

"I believe in judicial accountability and me, therefore, present the performance card below", he said in the beginning of the statement.

Justice Swaminathan also expressed apology for his inability to pass judgments in almost 75 cases which were reserved by him. "I find it difficult to prepare the orders without the benefit of rehearing. But then, I am not supposed to retain the bundles once the cycle is over. Therefore, with a heavy heart I am releasing almost 75 cases on my board,” Justice Swaminathan said.

He has also announced plans to ensure that his judgments hereafter are more comprehensive.

He has also called on the lawyer community to aid in ensuring that cases are dealt with expeditiously. In this regard, he has appealed to advocates that they should refrain from taking more than one adjournment and that they should be prepared for their case once it is apparent that it would be dealt with by the judge.

Further, it is stated that he hopes to find a way to ensure that order copies are dispatched more expeditiously.