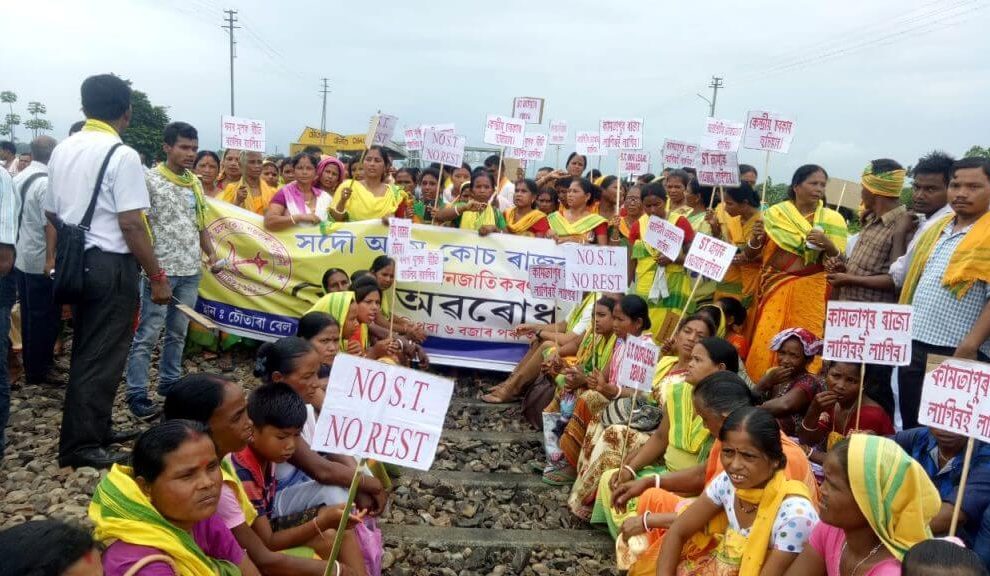 Kokrajhar: In retaliation of the August 6 incident, where police lathi-charged on protesting Koch Rajbongshis, the All Koch Rajbongshi Students’ Union (AKRSU) has announced that they will boycott the Independence Day Celebrations on August 15. The Koch Rajbongionshi organisations had launched a protest at Choutara Railway Station in Kokrajhar district with the demand that the Scheduled Tribe status be conferred upon the community.

The organisations had earlier said that they will boycott the upcoming Lok Sabha elections if the government fails to fulfil their demand.

It may be mentioned that earlier on August 6, at least nine persons, including five security personnel, were injured and vehicles damaged during the eight-hour railway blockade by the All Assam Koch Rajbongshi Sanmilani (AKRS) supported by All Koch Rajbongshi Students’ Union (AKRSU) at Choutara Railway Station in Kokrajhar district.

Security personnel resorted to lathi-charge and opened fire in the air when the protesters turned unruly. The picketers were asked to leave the railway track after the Sanmilini leaders called off the blockade after submitting a memorandum.

Rajen Singh, Kokrajhar Superintendent of Police, said that the protesters first manhandled Kokrajhar Additional SP (Security)-Kamal Gupta, ADCs, magistrates and security forces and later pelted stones at the security personnel and damaged the police vehicles. This forced the police personnel to open blank firing in the air and lathi-charge to disperse the mob. He said after a memorandum was submitted to the administration, the Sanmilini leaders called off the blockade but the agitators refused to leave the protest site till 2 pm. Fearing backlash from the public, the Sanmilani leaders, including president Bireswar Saikia and general secretary Ranjit Kumar Ray, left the place but the agitators stayed back.

“With no option, we had to resort to lathi-charge and fire teargas when the agitators turned unruly, pelting stones at the security personnel and damaging vehicles,” said Kokrajhar SP Rajen Singh. A total of 18 persons were arrested. A case has been registered against the agitators.

President Bireswar Saikia and general secretary Ranjit Kumar Ray of the Koch Rajbongshi Sanmiloni had called the eight-hour blockade from 6 am on August 6 demanding fulfilment on their various demands, including the creation of separate Kamtapur state and Scheduled Tribe (ST) status to the community. They also said that the Koch-Rajbongsi community would be compelled to boycott the upcoming MP election to be held next year and resort to ‘No ST, No vote’ for the BJP if the Central and State governments did not grant ST status to the Koch Ranjbongi community before the 2019 Lok Sabha election.

The organization blocked the movement of various trains in Simaluguri Railway Junction for about four hours. AKRSU leaders alleged that the Union government, as well as the State Government, was playing political games with the six communities of Assam which had been demanding ST status since long. Before the general elections, the BJP had promised to settle the ST demand issue through dialogue. But after coming to power, the BJP-led government started playing political tricks with the six communities.

During the protest, the Sivasagar district unit of AKRSU and other units of Upper Assam also took part. Later, the organization submitted a memorandum through the Nazira SDO to the Prime Minister and Union Home Minister separately.