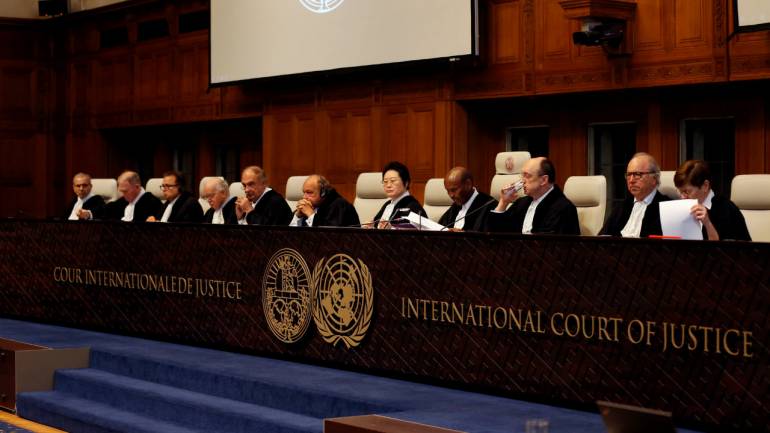 The Hague: This might turn out to be one of the major victories to India; the International Court of Justice (ICJ) on Wednesday ordered Pakistan not to execute Kulbushan Jadhav and asked it to reconsider the sentence awarded to him by a military court.

The International Court of Justice also directed neighbouring country Pakistan to grant consular access to Jadhav, while holding that it had “breached” the Vienna Convention in this regard by denying him this right.

The court rejected all the objections of Pakistan, including one unanimously on the admissibility of the case and also the claims by Islamabad that India had not provided the actual nationality of Jadhav.

The ICJ, in its detailed judgment read out by its President, said it was satisfied that Jadhav, who was arrested on March 2016 and sentenced to death by a military court on charges of spying in April 2017, was an Indian national.

It observed that even Pakistan, along with India, had acknowledged the fact that Jadhav was an Indian national.

The court, in its ruling by 15-1, declared “a continued stay of execution” on Jadhav, saying it “constitutes an indispensable condition for the effective review and reconsideration of the conviction and sentence” of the accused.

It said it “finds that the appropriate reparation in this case consists in the obligation of the Islamic Republic of Pakistan to provide, by the means of its own choosing, effective review and reconsideration of the conviction and sentence of Mr. Kulbhushan Sudhir Jadhav, so as to ensure that full weight is given to the effect of the violation of the rights set forth” of the Vienna Convention on consular access.

The court had on May 2017 ordered a stay on Jadhav’s execution till the final verdict in the case after India approached it against the Pakistani military court’s award of death sentence in a solid trial.

The court found that Pakistan deprived India of the “right to communicate with and have access” to Jadhav to “visit him in detention and to arrange for his legal representation, and thereby breached the obligations incumbent upon it under the Vienna Convention on Consular Relations.

The world court said that by not notifying the appropriate consular post of India in Pakistan without delay of Jadhav’s detention, India was deprived of the right to render assistance provided for by the Vienna Convention to the individual concerned.

Pakistan “breached the obligations incumbent upon it” under the Vienna Convention on Consular Relations, it observed.

The court said Pakistan is “under an obligation” to inform Jadhav “without further delay of his rights and to provide Indian consular officers access to him” in accordance with the Vienna Convention on Consular Relations.

Former foreign minister Sushma Swaraj wrote on Twitter, “I wholeheartedly welcome the verdict of International Court of Justice in the case of Kulbhushan Jadhav. It is a great victory for India.”

Meanwhile, welcoming the verdict of the International Court of Justice on Jadhav, Prime Minister Narendra Modi on Wednesday said “truth and justice” have prevailed.

He also said his government will “always work for the safety and welfare of every Indian”.

It may also be mentioned that in 2017, a Pakistani military court declared Jadhav guilty of terrorism and espionage, and sentenced him to death. India approached the ICJ for mediation in the case. The ICJ asked Pakistan to hold off the execution till it reaches its final verdict in the case. In December 2017, Jadhav’s mother and wife travelled to meet him, but their interaction was across a glass barrier and through a telephone. Jadhav’s responses during the interaction also came across as stilted and tutored. India has accused Islamabad of violating the Vienna Convention on Consular Relations by not allowing consular access to Jadhav. India has sought annulment of Jadhav’s death sentence and his immediate release, saying the verdict failed to satisfy even the minimum standards of due process.

In February this year, the world court held a four-day public hearing during which both India and Pakistan submitted their detailed pleas and responses. India based its case on two broad issues – breach of Vienna Convention on consular access and the process of resolution. India has urged the ICJ to annul Jadhav’s death sentence, saying the verdict by a Pakistani military court was based on a “farcical case” and failed to satisfy even the minimum standards of due process.

Pakistan has maintained that since Jadhav is an Indian spy who illegally entered Pakistan, he was not entitled to consular access. A month after his arrest, Pakistan released a video of Jadhav’s “confession” of being a spy for the Indian intelligence agency, RAW. In the video, Jadhav said he had been indulging in various activities in Karachi and Balochistan at the behest of Research and Analysis Wing (RAW). India rejected the video calling it doctored and fake. India would be hoping for a favourable verdict in the case.