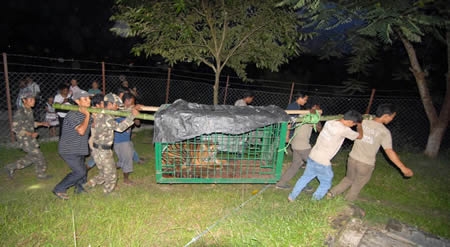 Itanagar, May 2:  With no hope of releasing them into the wild due to delay in certain official procedures, Ipra and Chipi, the two tiger cubs rescued way back in 2012 from Angrim in Dibang Valley district, have adapted to their new home at Biological Park here and are well settled now.
While Ipra the male tiger named after Ipra Mekola, a member of the State Wildlife Advisory Board from Angrim area, Chipi got her name from Anchal Samiti Member (ASM) Chipi Mekola.
During September 27, 2013 the cubs which, were kept at the Mini Zoo at Roing town, the headquarters of the Lower Dibang Valley district, were brought to the Biological Park covering a 900 kilometers distance journey that included road travel through two states (including parts of Assam) and crossing the Brahmaputra twice, once on a ferry and once by a bridge. Ipra and Chipi reached their new home the next day.
On December 3, 2012, the officials of the Centre for Wildlife Rehabilitation & Conservation (CWRC) at Kaziranga National Park in Assam’s Golaghat district got news that four tiger cubs were creating trouble in Angrim and adjoining villages and that people were chasing them.
A team of officials rushed to the area and after several days of search they found three cubs on December 13. While Ipra and Chipi were saved, their sibling died within hours of pneumonia. They were been about seven-to eight-month-old then and weighed between 30 and 35 kg each.
Two days later, Ipra and Chipi were taken to Roing and put up in the Mini Zoo there.
“The tigers are well settled now and they have gained weight and increased in size. The approximate weight of the male tiger now is around 300 kg while the female weighs more than 200 kg,” Curator of the park Raya Flago informed.
Flago said, several quarters have claimed the species of the tiger as Royal Bengal Tiger, but the wildlife authority in the state believe it to be a Indo-Chinese species as the fur pattern are different and he size bigger than the Royal Bengal species.
“We have already sent blood sample and fur to conduct test and to identify the species to Hyderabad-based Laboratory for Conservation of Endangered Species (LaCONES) and the result is awaited,” the Curator added.
The Biological Park in Itanagar is a sprawling 100-hectare complex, of which 1.5 hectares or about 15,000 sq m are kept exclusively for tigers. With Ipra and Chipi, the park now have six tigers in all while, Ipra and Chipi are being kept in a separate enclosure.
Fed on the stipulated diet of 10 kg beef each per day, Ipra and Chipi are not fed on Tuesday as the day is the fasting day for both of them. They usually eat at night being nocturnal in nature.
Flago said that both the tigers were supposed to be released in the wild but it is too late now as they have grown enough and might not cope well in the wild. Moreover, delay in certain official procedures has sealed their chance for releasing in the wild.
“During 2015 we have submitted a proposal to the National Tiger Conservation Authority (NTCA) for releasing Ipra and Chipi to the wild. However, due to delay in certain formalities it could not be materialized,” Flago said adding, there are certain protocols to be followed for releasing tiger in the wild.
CITU to lodge complain with ILO against BJP
Dempo beat Lajong Juniors