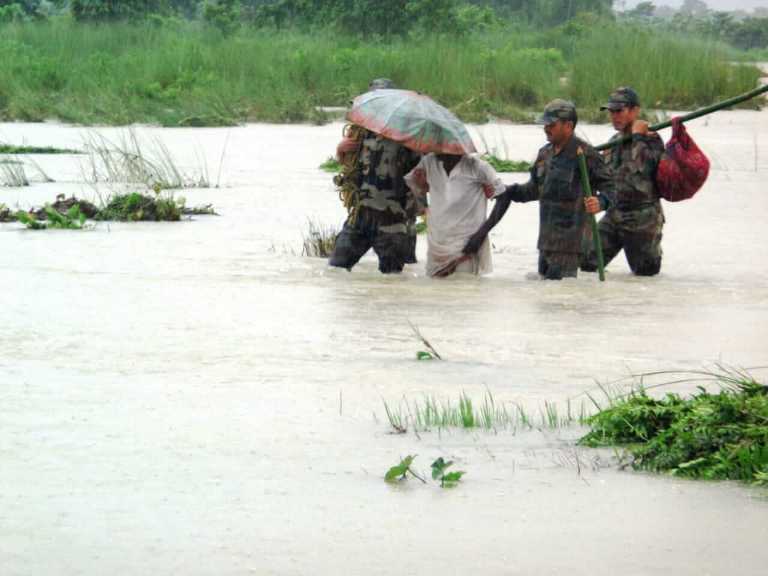 Friday: On 11 Jul 19, due to incessant rains in the area, River Champamati in Chirang dist started overflowing. This caused a flood like situation in 2-3 villages on East Bank of Champamati River in general Area Ranikhata. The situation was turning grave, especially in village Aminpara where 20-30 civilians were stranded in flood waters. The level of water has been rising every passing minute.

An Army patrol was on its routine movement when they saw the stranded villagers in Aminpara, who desperately needed help.

Although not tasked as being the first responders to the flood situation, seeing the gravity of the situation, the troops sprung into action and evacuated 07 Males, 06 Females, 19 Children and 7 elderly persons. Total of 39 villagers was evacuated. 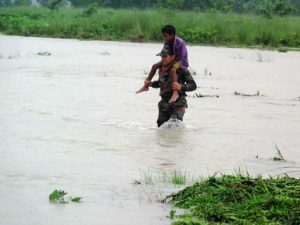 The villagers have expressed deep gratitude and heartfelt thanks for saving their lives.

Army deployed in Chirang has been geared up since pre-monsoon days to cater for such contingencies. Army columns are on standby in the entire district of Chirang to tackle the flood situation. 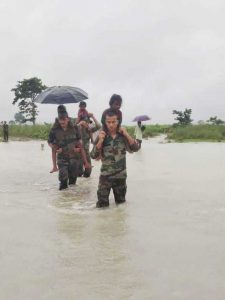 It may be mentioned that with flood waters inundating over 700 villages in 17 districts and affecting over 4 lakh people across the State, Chief Minister Sarbananda Sonowal on Thursday reviewed the prevailing flood situation and asked Deputy Commissioners (DCs) and other officials to remain fully alert for tackling the situation. The Chief Minister interacted with the Deputy Commissioners and district-level senior officials of different government departments through a video conference from Guwahati and directed them to remain fully alert and prepared to tackle flood.

Stating that people in distress must get adequate care and response, the Chief Minister asked the DCs to activate 24×7 control room for immediate response to flood situation in their districts. He enquired about the status of relief camps, distribution of relief material to marooned people and measures adopted for safety and security of animals in the flood-affected districts.

The Chief Minister, while stressing on the need to ensure adequate medical services to flood-affected people, asked the Deputy Commissioners contact the Director of Health Services if there is any shortage of doctors in their respective districts. He also instructed them to take steps for adequate care for animals affected by flood and arrange fodder for them. Moreover, in view of a spurt of JE and malaria cases, the Chief Minister directed the health department functionaries to collect blood sample of relief camp inmates to contain the diseases.

Underlining the importance of prompt action by NDRF and SDRF personnel in rescue operations, the Chief Minister asked the DCs to remain in close touch with concerned district administrations where those teams are presently being stationed. He also directed the police force to carry out regular patrolling in flood-affected areas to ensure the safety and security of the property of the flood-hit people.

Chief Minister Sonowal further asked the Power Department to take all necessary measures to prevent incidents of electrocution which may take place due to the negligence of departmental officials. Besides, in case of any casualty in flood, he directed the DCs to release the one-time financial assistance to the next of kin of the victim immediately.

Apart from reviewing the present situation of inundation at Kaziranga and Manas National Parks, the Chief Minister took stock of the preparedness of Kamrup (Metro) district administration to respond to incidents of the landslide in the district. In view of several such incidents taking place in Guwahati in the past causing loss of many lives, Chief Minister Sonowal asked the DC and Assam State Disaster Management Authority to identify all landslide-prone areas and sensitize the local people to vacate such places to avert any eventuality. He directed the Kamrup (Metro) DC to conduct sensitization meetings with the local people and generate awareness amongst them about the adverse fall out of living in such areas, stated a release.

Chief Minister Sonowal during the interaction emphasized on the need for empathetic approach from all rank and file of government officials. Urging the district officials to work for the flood-hit with utmost sincerity and dedication, he called for upholding the ‘Team Assam’ spirit by all officials.

Also Read: Flood Affected Over 4 Lakh People Across the State