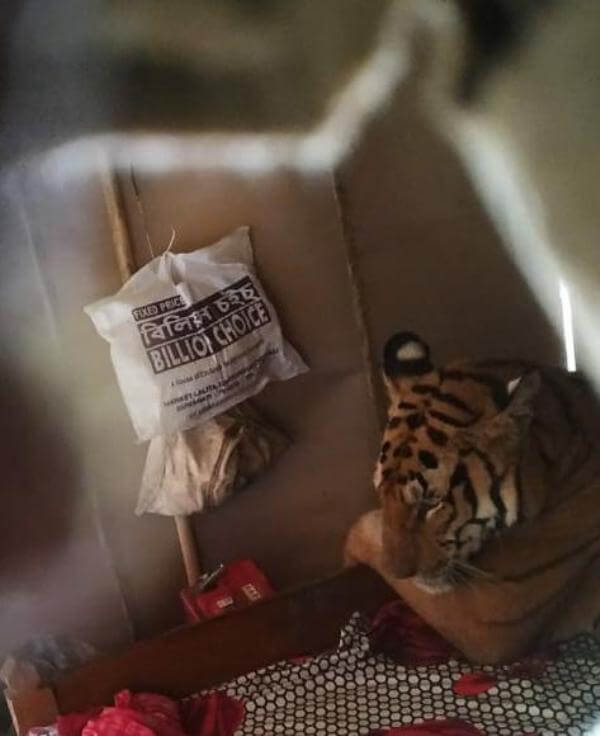 Guwahati: The wild lives of the Kaziranga National Park, after being submerged by floodwaters, have started taking refuge at the nearby places and houses. One such incident of a Royal Bengal tiger taking shelter at a house near the national park has created a wide sensation. A viral photograph of a tiger lying on a bed of a house has proved it once again that the wild lives of the national park are left helpless at the sudden cruel turn of nature.

A mission to rescue the tiger has already been started by the foresters of Kaziranga wildlife range. Reportedly, the tiger is dwelling in a house in Harmoti village under Bagari range of the national park. The residence the tiger has chosen to take shelter while out in search of food is of Dipak Orang.

The Wildlife Trust India has posted a picture of the tiger in a twitter post. The tiger in the photograph is seen lying down on a bed.

#JustIn our vet @samshulwildvet is making plans with #AssamForestDepartment @kaziranga_ to tranquilise a #tiger that has entered a house and is relaxing on a bed! #AssamFloods bring in unusual guests! #Kaziranga Zoom in to see #OMG wish them luck! @action4ifaw @deespeak pic.twitter.com/SX2FoYOB6K

Further reports received from the Wildlife Trust India says that the tiger was spotted next to the national highway at 8.30 am. The location the tiger has chosen to take refuge is just 200m away from the Kaziranga National Park.

As stated by the forest officials, attempts at tranquilizing the tiger and taking it to safe places are being taken up.

As Assam, since a few days, has been reeling under severe flood, the inhabitants of the state along with the wild lives and domestic animals are largely affected. With 95 percent of the Kaziranga National Park plunging under flood, a severe threat to the lives of the animals of the park has emerged.