Guwahati: The General Secretary and Senior Spokesperson to Assam Pradesh Congress Committee, Bobbeeta Sharma in a letter to the DGP of Assam Police Kuladhar Saikia claimed that BJP workers impersonating themselves as 'Journalists' calls up Assam Congress leaders in order to manufacture, fabricate and spread fake and hate news.

She also claimed that this is a new forte of BJP party workers through which they would record the voice samples of the Congress leaders and use it later during election time. 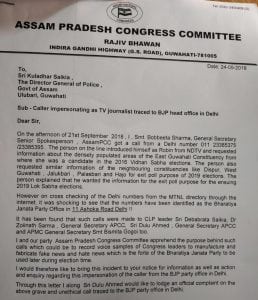 Sharma also mentioned that she received a call from a person on September 21, the person introduced himself as Robin, a journalist from a Popular English News Channel. He requested her to share information about East Guwahati Constituency along with neighbouring constituencies Dispur, West Guwahati, Jalukbari, Palashbari and Hajo for exit polls purpose for the ensuing Lok Sabha Elections 2019.

However, after cross-checking the number in the MTNL directory through the internet, it was found that the number was identified as the Bharatiya Janata Party office in 11 Ashoka Road Delhi.

Meanwhile, Dulu Ahmed had also stated that he would lodge an official complaint on the matter.