Backed by Ratan Tata, this couple is changing the game of diesel distribution in India

Guwahati: Pune-based Repos Energy is changing the game of energy distribution in India by starting a door-to-door diesel delivery with the Oil Marketing Companies. Starting with a team of two, to over 150 in just a year, this young couple is making the dream of door-to-door diesel delivery 'legal' come true from homegrown petrol pump business in Chakan, Pune, to form a dynamic energy grid. This young couple is setting up a whole ecosystem to provide cost-effective solutions for India's ever-growing need for energy logistics - Starting with diesel, through mobile petrol pumps. 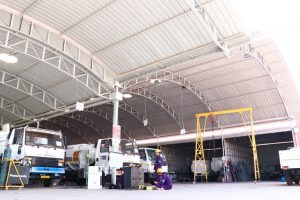 Two years ago, Aditi Bhosale Walunj (27) and Chetan Walunj (30) set on a mission to take their family business of a petrol pump, to a newer and much larger dimension. Fueling large scale industries was something that they were catering to on an everyday basis. But after noticing a massive amount of energy loss due to fuel theft and spillage - the duo decided it was time this issue was addressed. They saw a great opportunity to overcome these challenges by offering a door-to-door service of diesel to not just their existing end users - but to the entire nation. But to offer this kind of service on a large scale, they had to face multiple roadblocks - the know-how, infrastructure, and most importantly - government approvals around fuel distribution. 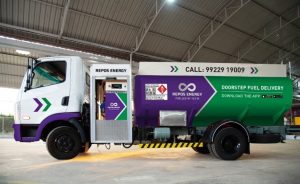 And to realize their dream, Aditi and Chetan spent over a year doing the R&D. During this time, they reached out to everyone who could lead them to their goal - to create a global brand that is 'Made in India'. An energy-efficient logistics solution, which will help reduce harmful carbon footprint, save energy, increase efficiency and organize energy distribution. The two went on to meet the officials at the Ministry of Petroleum and Natural Gas, wrote to the PM's office and got the support of Ratan Tata. 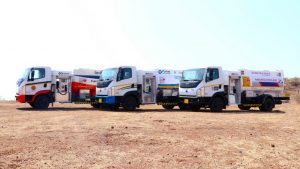 Married to their dreams

Chetan and Aditi met in 2015 when their parents set them up for an arranged marriage. While Aditi was planning to leave for New York to pursue Journalism, Chetan was single-handedly managing his family business. Their first meeting ended up in another, where they discussed their aspirations and future goals - to be able to make a difference in the world.

A student of Chemistry and Forensic Science, Aditi often found herself diving into things she found interesting. Chetan was still in his 2nd year of Mechanical Engineering when he took over his father's successful fuel station business.

What got the two close was their similar dreams, and that laid the foundation of Repos Energy. "Initially, Chetan's father was quite apprehensive about our idea of door-to-door fuel distribution, but his strong belief in his son's ability convinced him. That was our first major breakthrough," says Aditi.

The two took up a cozy office space in the city and started building a team. The following months were spent in meeting various officials to understand the processes and legality of such a huge project, which was still just an idea. "Both Aditi and I realized that we needed a self-sustainable model. And so we decided that we needed to build the whole ecosystem to successfully manage the logistics. To do this, we created a three-step delivery model - where we combined the technology with logistics by developing a mobile app and replicated a stationary petrol pump on a vehicle chassis making it a certified smart Mobile Petrol Pump" adds Chetan.

Their second major and the most significant milestone was a brief meeting with Mr. Ratan Tata. The duo spent about a week outside his house and finally managed to reach him through a letter seeking his mentorship. "He supported our idea, and connected us to the right people to get us closer to our goals," says Aditi. Their first pilot was to build a Mobile Petrol Pump for Tata Motors in 10 days. "It seemed impossible, but that's what our company stands for - Relentless & positive. We believe if you set out for the right cause with the right intention, everything is possible," adds Chetan. The start-up is going to be officially backed by Ratan Tata.

It was not a smooth journey all the way. "The biggest challenge for us was to have a policy in place. Which is why it was very important that we reached out to the Ministry of Petroleum, as this needed a new government policy in place," says Aditi. The other challenges were lack of know-how and expertise, which they gained in the process.

There was also a huge need to create awareness about diesel distribution, and the importance to organise the sector.

Repos have been completely self-funded from the beginning. "My father, Rajendra Walunj, was the first one to believe in our idea, and the efficacy of the solution. He joined our company as the director and pumped in the first 3 crores by selling his lands we had in Pune. Post that, we kept getting small rounds of investments from him to grow the operations," says Chetan.

From lands, and a fully-functional restaurant, along with the petrol pump in Chakan, Repos received capital from the family-run businesses. Until recently, when Ratan Tata officially confirmed his association with the company and has come on board as an investor.

Chetan and Aditi say they never really built a team. They put out their belief in what they were trying to do to everyone they met in the journey. And those who believed in their vision started becoming a part of Repos team. "We formed beautiful synergies," adds Chetan. "It was just the two of us who took up an office, as we felt the need to first have a base," says Aditi.

"We two began working when there was no concrete government policy on this particular concept. And today, we feel proud to announce that we pushed our boundaries, and made the system completely legal. And as the government policy is out, we are a team of 150 strong individuals who share the same vision," informs Chetan.

Repos Energy is building an ecosystem on the following revenue streams:

When Aditi and Chetan started out, the company barely had a lakh in monthly sales as they were still new and figuring out their strategy to penetrate the market. But one thing they were sure of at that time, was that they wanted to focus only in the Pune region. The company turned 2 on the 1st of June this year. And from 1-2 orders a month, Repos is now clocking 35-40 orders just in Pune. In terms of value, the turnover has grown from a mere INR 70,000 to nearly INR 2 crores a month (just Pune).

"While our focus revolves around giving convenience to the customer, the customer does not bear the cost of this convenience (unless the order quantity is low). We are able to meet our costs through the Gross Margins which we share with the Petrol Pumps that we partner with. As of today, the gross margin on Diesel stands at INR 2.2 per litre. This margin is shared between the petrol pump owners and ourselves in a certain ratio depending on the type of model," Chetan explains.

The company's strategy so far was to monetize Pune first before monetizing other locations. "When we say monetize, we enter into a revenue-sharing agreement with our dealers across the country. So far, we have two dealers in Pune whom we share our revenue with. The basis for sharing revenue is the Sales and Marketing effort we generate through our Sales team in addition to the marketing efforts," adds Chetan.

Over the next 3 quarters, Repos plans to monetize 120 dealers across 4 geographies of Pune, Mumbai, Bangalore and Chennai. The company plans to break even approximately 24 months from now.

Towards a Greener Future

Energy can be replaced at many places with diesel as green is the new tomorrow. Today we have diesel and we are just using it wisely. And this wise use of diesel is helping us reduce carbon emissions and loss of diesel.