Dibrugarh: The Chief Judicial Magistrate, Dibrugarh on Friday in a circular had directed the officials and staff members of the CJM establishment to use the Assamese language for all official works.

As per the circular, CJM AK Baruah passed the order to implement the Assamese language (as far as possible) for all the official works, including in petitions/applications, office notes, etc, in compliance with the Assam Official Language Act. 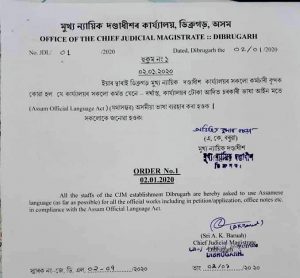 The order has come amidst the speculations about the fate of the ‘Assamese language’ in Assam following the introduction of the contentious Citizenship Amendment Act, 2019.