Dibrugarh ranks 415 in Cleanliness among 425 Indian cities, not the last!

Dibrugarh: In a major embarrassment to the district administration and the civic body, Dibrugarh has been ranked a lowly 415th rank in terms of cleanliness among 425 Indian cities surveyed in the Swachh Survekshan-2019. Dibrugarh is the home town of Assam CM Sarbananda Sonowal.

Four cities of Assam namely Guwahati, Dibrugarh, Nagaon and Silchar were part of the survey. 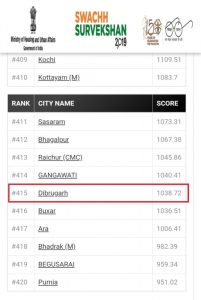 Notably, after a leading television channel showed Dibrugarh holding the first position among the cities with minimum cleanliness, there has been a sudden furore among the residents. They came out on various platforms lambasting the civic authorities.

It may be mentioned that Swachh Survekshan is an annual survey of cleanliness, hygiene and sanitation in cities and towns across India.

It was launched as part of the Swachh Bharat Abhiyan, which was launched aiming to make India clean and free of open defecation by October 2, 2019.