LAKHIMPUR: In the wake of Union Home Minister Amit Shah’s declaration in the NEDA conclave to pass the Citizenship (Amendment) Bill (CAB), Lakhimpur was once again rocked with strong protest programmes against the contentious bill.

The activists of the Lakhimpur district Asom Jatiyatabadi Yuva Parishad (AJYP) on Tuesday burnt the effigy of the Union Home Minister at Court Tiniali of North Lakhimpur town continuing their stand of opposition against the bill. The organization expressed vehement resentment against the present Union Government’s moves to pass the CAB soon.

Notably, it was reported that three Chief Ministers of the Northeast became vocal against CAB just after the declaration of the Union Home Minister in the NEDA conclave held on Monday in Guwahati while Chief Minister Sarbananda Sonowal and his two cabinet ministers- Atul Borah and Keshab Mahanta were silent on the issue. By staging the protest programme, the organization severely criticized and condemned this attitude of the Assam Chief Minister and the two cabinet ministers, alleging it as their silent support to the CAB.

“If the CAB is passed with the support of the State Government by ignoring the sentiments and the public opinion of Assam, we will intensify agitation against the State and Union governments in association with the public,” declared Lakhimpur AJYP president Lulu Baruah and general secretary Sudipta Hazarika while leading the protest programme. 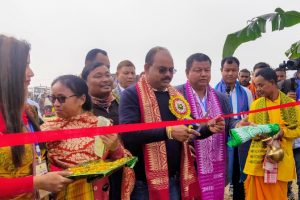