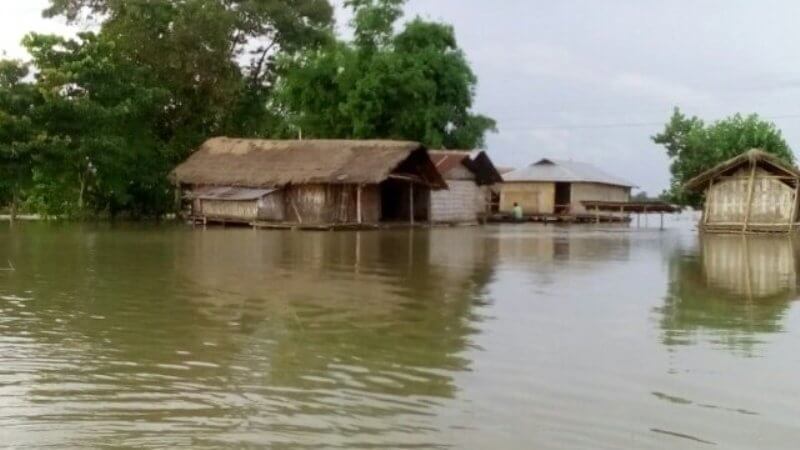 LAKHIMPUR: Due to the cease of incessant downpour that lasted for over a week, the water levels of the all major rivers in Lakhimpur like the Brahmaputra, Subansiri, Ranganadi, Kakoi, Boginadi, Shingara, Pabha, Dikrong and Dropang receded on Thursday.

As a result of it, the miserable flood scenario of the district improved to some extent as a whole. However, a total of 86 villages, 17 in North Lakhimpur Revenue Circle (RC), 4 in Naoboicha RC, 10 in Bihpuriya RC, 24 in Naoboicha RC under North Lakhimpur subdivision and 16 in Dhakuakhana RC and 15 in Subansiri RC under Dhakuakhana subdivision were inundated by the present wave of the deluge on the tenth day affecting 45,767 people. Flood has submerged 3361.87 hectares of crop areas and affected 14,169 big animals, 7,610 small animal and 8,305 poultry as per the report from the district administration. Around 177 inmates are still taking shelter in the flood relief camp set up at Sakupara LP School under Bihpuriya RC.

The management of Ranganadi Hydro Electric Plant (RHEP) closed the Radial Gate No. 4 of the Rangandi Dam on Thursday after continuously releasing the excess water of its catchment area for 11 days. The gate was closed at 2.45 pm. Prior to it, the management of RHEP had been releasing the excess water by opening the gate by 100 mm since 6.45 pm on the day. The gate was opened by 300mm from 5.30am and 200mm from 530pm on Wednesday. On the other hand, the district administration distributed 232.946 quintal of rice, 43.538 quintal of dal, 13.06 quintal of salt as relief items at 20 relief distribution points under six RCs of the district.