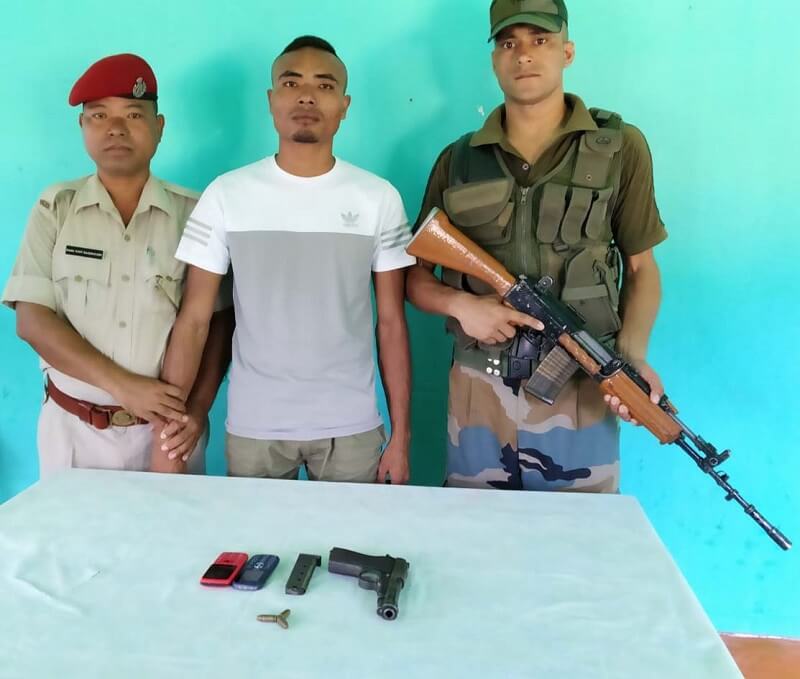 Bokajan: Ahead of the 73rd Independence Day, a joint team of Karbi Anglong Police and 12 Garhwal Rifles conducted a search operation in the Kherbari area under Dhansiri Police outpost and arrested a hardcore cadre of DNLA (Dimasa National Liberation Army) in the wee hours of Tuesday.

The arrested cadre has been identified as Betsing Jigdung alias Master alias John Dimasa Jigdung, a resident of Daudikho in Samnala village under Diphu police station. A 9 mm pistol along with a magazine and three live ammunition were recovered from his possession.

Twenty-four-year old Jigdung had been an active cadre of the disbanded UPLF (United People’s Liberation Front) since 2014 and had also surrendered in 2016. He again joined DNLA in January, 2019 and was responsible for recruitment and training of the new cadres joining the outfit.

Jigdung was reportedly a corporal ranked cadre in outfit and was appointed as training instructor bearing army no. 1991. He has also been involved in several cases of extortion and arms deal between the outfit and NSCN (IM) under whose aegis the DNLA had taken shelter. He had also featured in a video released by the outfit in which he was seen talking of uniting the Dimasa people and building a separate state for the Dimasas.