Guwahati: Stand-up comedian Abhineet Mishra reached out to Assam Finance Minister Himanta Biswa Sarma through twitter, requesting him to "do a small panel debate on #CAA_NRC on a channel and time of your choosing. Let's have a live audience. Either you convince us or I convince you. Works?" 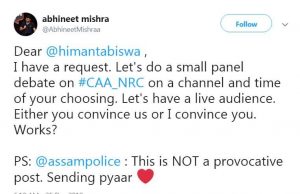 Sarma in his reply said that he had already extended such a request to AASU (All Assam Students' Union) adviser-in-chief Samujjal Bhattacharya.

"I have already publicly requested Advisor of AASU Sri Samujjal Bhattacharya to join us for a debate in Srimanta Sankardebava kalakhetra on CAA, NRC and on the factual details of assurances given by Honble HM @AmitShah during his discussion with AASU leadership," Sarma tweeted.

Sarma who has been holding a Peace & Progress Rally in different parts of the city to dispel rumours he claims has been spread by the opposition.

Agitations against CAA occurring throughout the country have been marred with violence leaving several dead and many injured.