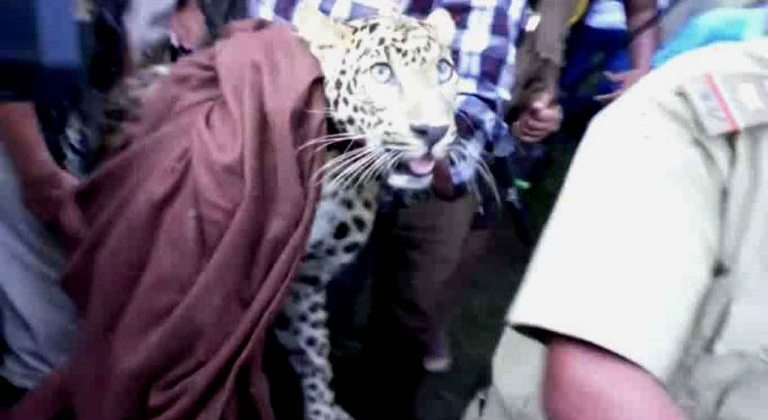 Dibrugarh: Sensation triggered at Panchali area of Dibrugarh town after a full-grown male leopard strayed into a residential colony on Thursday morning.

According to forest officials, the big cat which was taking shelter under a parked car was first spotted by a local resident at around 8.45am. Stunned by the unusual sight, the man immediately raised an alarm and people from the busy neighbourhood rushed out of their homes to watch the animal.

Sources also informed that the leopard leapt out from his resting place and dashed into the house of one Tiklu Khan, thus, sending the entire family into a tizzy. The terrified family of five somehow managed to lock themselves inside their bedroom as the leopard kept prowling inside the living room.

Meanwhile, hearing the screams of the family, a huge crowd gathered and tried to shoo away the big cat. Soon the cornered animal sprung out of the house and tried to escape jumping over a gate. An onlooker identified as Lakhinder Rai was injured as the feline pounced on him while trying to flee.

Locals stated that Rai suffered deep injuries in his left hand and was rushed to the Assam Medical College and Hospital for better medication.

Later, the big cat was found to be hiding in the ceiling of a vacant house belonging to one Ramen Ghosh. Finally after a eight-hour long chase, a team of the Wildlife Trust of India and forest department managed to tranquilise and capture the leopard at around 4.15pm.

Speaking to media, Dibrugarh forest ranger Nareswar Das said, “A veterinary team is tending to it. It will be kept under observation for some time before being released into the forests.”

“The leopard is 2-year old.  It is a little dehydrated but thankfully there are no signs of any injury. We will decide soon where to release the forest. We will do another check-up before releasing it,” said WTI veterinary surgeon Khanin Changmai.