Agartala: On Wednesday, based on specific information received by Field ‘G’ team of Sector Panisagar, Border Security Force (BSF) about a consignment of Heroin/Brown sugar, being transported from Assam to Agartala by Passenger train, the 166 Bn BSF and a team of BSF personnel led by Uma Shankar, AC along with 02 SOs and 07 ORs including member of Field ‘G’ team, Sector Panisagar boarded the Train in coach, where the suspected items were informed to be kept.

On thorough search of the bogie, one carrying bag with suspected Heroin/Brown sugar in a Polythene medium sized hidden inside empty Nokia mobile packet wrapped in a plastic was recovered. A quantity of suspected Heroin/Brown sugar – 01 packets of 175 gms at Rs 20,000/- worth Rs.35,00,000/- recovered. The passengers traveling by the said train were enquired about the ownership of the bag, but no one claimed its possession. Seized items handed over to GRP Dharmanagar Railway Station and FIR lodged with PS Dharmanagar.

In another case, today, on Thursday at about 09:00 am, on specific information of Field ‘G’ team, Sector Teliamura, BSF, regarding movement of a suspected truck, troops of Field ‘G’ team, Sector Teliamura and Quick Reaction Team of 130 Bn BSF, detained above-mentioned truck bearing Regt No.HR-38-U-5420 (Ten Wheeler/motorcycle carrier), on the name of firm LTC logistics Pvt Ltd, near gate No.04 of 130 Bn BSF, Ambassa along with the driver and two others, while moving on NH-08 and approaching towards Guwahati from Agartala side. 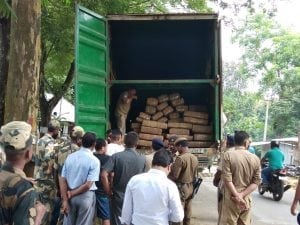 Subsequently, local Police and Magistrate were informed and on their arrival, above detained truck was thoroughly checked to lead to a recovery of Ganja – 81 Nos Bundle, of assorted size approx. 965.100 kgs in weight worth Rs.48,25,500/- Indian currency 49,500/- and 02 Nos Mobile phones by BSF and Tripura Police joint Ops party.