Movies, stars, filmmakers, auteurs, and critics bundled together as quintessential constellations of art, commerce, and glamour at the recently concluded 2nd Guwahati International Film Festival, 2018, which took place amidst a jam-packed crowd at the Srimanta Sankardeva International Auditorium, Kalakshetra, Guwahati. Building up from last year, the weeklong extravaganza, held between October 25 and 31, attracted well over ten thousand footfalls, presenting not only an eclectic mixture of some of the best cinema from Asia, Arab, Mediterranean, Europe as well as the North East India, but also a condensed space where different ideologies and interests intertwined. 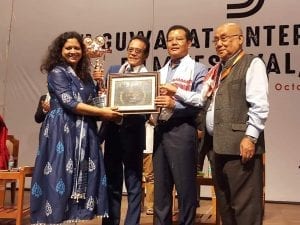 The closing ceremony was graced by Naba Kumar Doley, Minister, Cultural Affairs, Assam. One of the country's prominent filmmakers Saji N Karun graced the occasion as the Chief Guest.

Doley in his speech said that the festival has not only created a platform for international filmmakers to network and promote their work, but it has also been the forum for many emerging filmmakers of the region.

The festival, he affirmed, was also an attempt to forge connections between various cultures in a warm, tranquil environment, and facilitate international connection between filmmakers and students striving to stimulate fruitful partnership at the intersection of cinema, arts and business.

Earlier, Pabitra Margherita, Chairman of Jyoti Chitraban, in his welcome speech thanked the State Government for its tremendous support to the second edition of GIFF, 2018. He also expressed gratitude to the Chief Minister for the encouragement and much needed impetus to the event. "It was the chief minister who aspired to give student film-makers the opportunity to interact and exchange views with renowned national and international film-makers and thus the Open Forum for discussion and the Master Class became a significant part of Film Festivals synergy," Margherita said.

Festival Director Monita Borgohain eloquently mentioned about the immense cooperation from all the 10 ASEAN countries and the interest shown by the Ambassadors and Envoys from Serbia, Argentina, Latvia, Myanmar, Lithuania and Estonia. "It has certainly boosted our spirits and encouraged us to eye bigger goals in the future," she said.

The Chairperson of the jury and eminent filmmaker, Monju Borah declared the results of the Competition Section.

The festival, which saw the India premiere of Jahnu Barua's much anticipated Assamese film 'Bhoga Khirikee', awarded noted actor Arun Nath with the Special Jury Award that also carried a cash prize of rupees one lakh, for his performance in the Film 'Calender'.

The award for the second Best Feature Film of North East, comprising of a Silver Camera along with a cash prize of Rs. 150,000/- went to Monjul Barua's 'Kaaneen - A Secret Search'.

The Best Film Award, comprising of a Golden Camera, along with cash prize of Rs. 200,000/- went to Arup Manna's 'Aamrityu- The Quest'. The Jury's Special Mention Award went to Partha Hazarika for his performance in the film 'Kaaneen - A Secret Search'.