How #MeToo Movement can be a Catalyst for Social Reform

The genesis of life on Earth began with the concept of procreation between male and female. Thus, it is to be expected that the female of our species, the woman, is treated with the dignity befitting life-giver of the species that is at the pinnacle of civilization. But sadly, this has not always been the case. Throughout history, and extending to this very day, women have been regarded as second-class citizens by men folk and society has relegated them to a role of servitude and dependency. Women have borne the responsibility of further engendering our human race, while their needs and desires have long gone unfulfilled. It is especially true of our country, India, which has been plagued by a history of injustice, sexism and social iniquity (especially targeted against women). Thus, it is my belief that we, as Indians, should fully embrace the social upheaval facilitated by a movement like #metoo and contribute towards creating a safe haven for women.

The #metoo movement, which finds its genesis in various allegations of sexual misconduct against Hollywood producer Harvey Weinstein, has been dismissed by detractors as an "internet trend", while some allege that it has been politicized by some women to gain leverage over men they don't like. Be as it may, we cannot belittle the impact of this movement in creating awareness across the board regarding issues related to sexual misconduct and the importance of consent. Scores of women have used this movement as a crutch to have their voices heard. The relevance of this movement in India cannot be emphasized enough, as many of the issues that this movement deals with, such as sexual misconduct and abuse of women by men in positions of privilege, are basic concepts that many of our brethren in India fail to comprehend. Morally reprehensible actions such as cat-calling and sexual violence against women must be discouraged through undertaking of legal action as well as societal conditioning and repair. It can also be argued that since ethics are principally inculcated in the home environment, respect for women must be instilled by parents during a child's formative years. If these steps are taken, mishaps such as the viral video on Youtube showing a Delhi cop's son mercilessly beating a woman can perhaps be avoided. 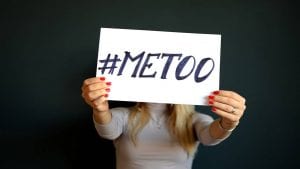 I feel that we, as Indians, must use this opportunity to expel the ills of sexism and physical as well as psychological violence perpetrated against women. In the throes of a marked shift in gender roles, wherein women are now starting to find an equal footing thanks to education and employment, we must acknowledge and appreciate the right of women to physical as well as psychological well-being. We must also ensure that woman empowerment must also encompass rural areas, where female foeticide is still not that uncommon a phenomenon. The various Government schemes as well as NGOs must work in a co-ordinated manner to bring the fruits of modern civilization and scientific development to the grassroots levels. To empower women truly and fully, the Government has to provide them with the tool of education. Education will make them aware of their rights and ensure that they can earn their own livelihoods. 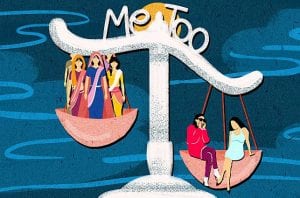 2018 has marked a pivotal point in the fight for women's rights and many brave women have used the exposure provided by social media to bring attention to sexual harassment to the masses, and we should use this as an opportunity to ameliorate the problems faced by millions of woman all over our country struggling with issues relating to education, sanitation, sexual violence, etc.

Moreover, it is time to break societal conventions and embrace women into the mainstream instead of relegating them to the shadows and treating them as baby-birthing machines. While the sexual harassment victims are served justice in the courts, women who are born victims by virtue of being born women in India must find justice in our hearts and minds.

The #metoo movement should not only benefit metropolitan women with access to social media, but rather, it should serve as a wakeup call for all citizens of our country to look after each and every single need and interest of all women living under the banner of India, our great nation.