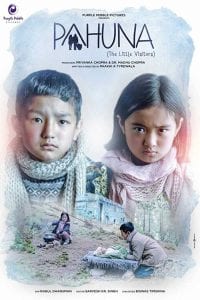 The film won Best Film (Jury's Choice) and a special mention in the international feature film category. The film received an overwhelming response at its European premiere at the festival. 'Pahuna' had its world premiere at the Toronto International Film Festival in 2017.

The film narrates the story of three Nepalese children separated from their parents and their journey back home.

Paakhi A Tyrewala has directed the Sikkimese film, which is backed by Priyanka and her mother Madhu Chopra's banner Purple Pebble Pictures.

"Pahuna will always be a very special film for all of us at Purple Pebble Pictures.

When we started the journey of 'Pahuna', we didn't anticipate the film to go this far. But God has been kind and the film has resonated with the audience not just in India but across the globe," Madhu Chopra said in a statement.

"I'm grateful to SCHLINGEL children's film festival for the recognition. We are looking forward to many more such milestones in our journey at Purple Pebble Pictures," she added.