Grammy-nominated Indian-American songwriter-rapper Raja Kumari feels women are underrepresented in the music industry, and says celebrating women is of supreme importance at the moment.

Kumari added that she felt inspired after being part of the third annual Women in Harmony pre-Grammy brunch here last week.

"It was so great to be a part of Bebe Rexha's Women In Harmony. Our voices are an essential part of the world, and are underrepresented in the music industry," Kumari said.

"This event in particular is special because you're surrounded by so many inspiring and strong women. Behind the biggest songs of the year are these incredible women, and Bebe inspired me to bring this energy to India and empower more women by being vocal and bring females together, because it's the only way we'll move forward. We're at a time where celebrating women is of supreme importance, and I think everybody at this gathering has always been a champion of female empowerment, especially showing it isn't just men who sit behind the scenes, which is a common perception in the music industry," she said.

The rapper feels it is "important to shine a light on this community that doesn't always get a lot of coverage".

"Women have a voice and they know that they do and that's empowering. And young girls should learn from that and have someone to look up to," she added.

At the event, Rexha gave an impassioned speech to her guests. She said: "The purpose of Women in Harmony for me is to address the staggering inequality. And there are so many bada** b**ches in here, and ita¿s one thing about saying I am about female empowerment, I believe in women, and I want to help women, but it's another thing actually showing up and being in this room. This event is so important to me because I wanted to give other songwriters and up and coming songwriters something I never had: an environment that I felt safe in."

The 62nd annual Grammy Awards took place on Sunday here. In India the ceremony was aired on Monday morning on Vh1.

Women, please take note. Looking younger is now easier as researchers have revealed that rhinoplasty, or cosmetic nose surgery, may make a woman look up to three years younger.

For the findings, published in the Aesthetic Surgery Journal, the research team from University of California used Artificial Intelligence (AI) to study before-and-after photos of 100 female patients, ages 16 to 72, who underwent rhinoplasty.

At 12 or more weeks later, standardised photographs were analysed with the technology, which estimates a person's age by cropping the face from a photograph and then extracting a prediction through an algorithm.

Rhinoplasty involves making structural changes to the bone and cartilage through small incisions inside the nose and when necessary around the nostril, all while a patient is under general anesthesia.

The rhinoplasty procedures in this study were customised for each patient to fit the person's face best.

Until now, there has been little to no objective scientific evidence for the rejuvenating effect of rhinoplasty. 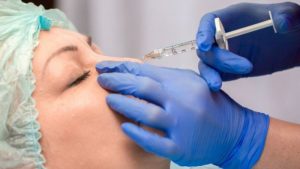 "This technology allows us to accurately estimate age in an objective way and has proven to recognize patterns and features of aging beyond what the human eye can perceive," Dorfman said.

According to the researchers, the results were even more dramatic in women over 40, some of whom were estimated to look seven years younger after rhinoplasty.

However, because the sample size of the 40-plus group was small (25 women), the researchers said further studies need to be done to validate the results. (The median age of the study participants was 32.)

The nose is not usually a focus of anti-aging treatment. However, like other features of the body, the human nose, which is made up of soft tissue, cartilage and bone, also ages.

"The nose loses support as it ages and can take on a more prominent or droopy appearance," said study author Jason Roostaeian.

The nose is also affected when other features of the face age.

"When we lose facial fat and volume in our cheeks, which are the canvas that our nose sits on, the nose becomes more prominent," Roostaeian added.

5 health tests every woman should have

New Delhi, Jan 18 (IANSlife) Indian women often tend to put their own needs on the backburner, preferring to tend to home and family first. However, the fast-changing lifestyle and juggling career with bringing up children sooner or later begins to take a toll on their health. Many common health problems in women can be prevented or effectively tackled by undergoing testing for the following five health tests, suggested by Dr Kirti Chadha, Sr. Vice President with Metropolis Healthcare Ltd.

Anaemia, the most common blood disorder, is a condition in which a person lacks enough healthy red blood cells to carry adequate oxygen to the body's tissues or organs. Women are especially at risk of iron-deficiency anaemia because of blood loss from their periods. India carries the highest burden of anaemia despite having an anaemia control programme running for the last 50 years. About 58.6% of children, 53.2% of non-pregnant women and 50.4% of pregnant women in India were found to be anaemic in 2016, as per the National Family Health Survey.

The normal haemoglobin level for women is 12 gram per decilitre (g/dlL). All women should get tested for anaemia at least once a year. The test will look for the size and colour of red blood cells, haematocrit, haemoglobin and ferritin levels.

Researchers have linked vitamin D deficiency with increased risk of poor bone health and depression in women with Polycystic Ovary Syndrome (PCOS). Symptoms include bone pain, muscle weakness and fatigue. Women often do not get enough Vitamin D from their diet or being exposed to sunlight, and end up being deficient. Having optimum levels of vitamin D is very important for overall health and well-being of a person.

The most accurate way to measure how much vitamin D is in your body is the 25-hydroxy vitamin D blood test. A level of 20 nanograms/millilitre to 50 ng/mL is considered adequate for healthy people. A level less than 12 ng/mL indicates vitamin D deficiency.

As women get older, they become more prone to osteoporosis (reduced density and quality of bone). A good healthy diet is enough to provide all the calcium that our body needs. However, women do not realise they have low calcium levels until they have suffered bone loss or fracture.

Women should undergo a blood test once a year to check for levels of calcium, albumin and ionized or free calcium. Sustained low calcium levels of below 8.8 mg/dL may confirm a diagnosis of calcium deficiency disease (Hypocalcemia).

Women should start undergoing these exams every year from the age of 21, or even earlier if they are sexually active. This is important to reduce their risk of cervical cancer, which is the second leading cause of death in women due to cancer. Cervical cancer can be entirely avoided through regular screening.

A pelvic exam will generally include an external visual exam to check for irritation, redness, sores, swelling or other abnormalities, followed by an internal visual exam. A pap smear test is conducted to examine cervical cells and check for any abnormal growth in the uterus and the cervix.

Barring any other problems, women aged 30 and above need a pap smear once every three years if they have had three normal tests in a row.

All prevention tests in women start early, and so is the case for the exam to check for breast cancer. A manual exam where a doctor tests for lumps and abnormalities is recommended starting around age 20 up to until 40 years.

A mammogram is a screening test for breast cancer and involves applying moderate compression to the breasts so that X-ray images can be captured. Mammograms are done every one or two years beginning at age 40, as recommended by the American Cancer Society.

(Puja Gupta can be contacted at puja.g@ians.in)