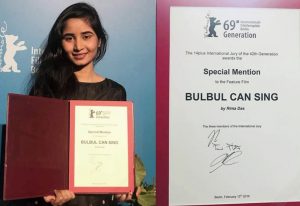 National Award-winning filmmaker Rima Das' Assamese feature film ‘Bulbul Can Sing’ received a Special Mention at the Berlin International Film Festival 2019. The film, which was competing in the Generation 14 Plus category, had its European premiere at the festival.

"I am extremely pleased and honoured to receive this important award as a Special Mention from the international jury - Berlin Generation 14 plus, at the Berlin International Film Festival 2019," Das said in a statement.

The Generation 14 Plus selection focuses on films that take young people seriously in their narratives and their cinematic languages. These are told through the eyes of their young protagonists, making their worlds tangible and accessible to the rest of the world.

With her third independent feature, Rima Das presents yet another gentle and fervent tale of adolescent love and identity. The film follows 15-year-old Bulbul, an exuberant young girl on the cusp of adulthood, and her two friends, Sumu and Bonny. As the three teenagers explore their own identities, the film tactfully conveys the tyranny and subjugation that society imposes and undergoes.

The 95-minute-long film, with its pleasing simplicity and realism, uses the rural landscape as the stage on which to dramatise the story of three teenagers searching for their identity, focusing for the most part on Bulbul, whose clash with traditional rules of behaviour leaves her shaken.

One common thread that runs through all the three feature films of the director is their setting - her native village of Kalardiya in Chaygaon, Assam. Das draws her inspiration from real-life people and places, but turns their lives into compelling fiction.

‘Bulbul Can Sing’ is strengthened by its candid understanding and strong performances by Arnali Das, Manoranjan Das, Manabendra Das, Bonita Thakuriya, Pakija Begam, etc. It is produced under Das' Mumbai-based banner, Flying River Films. Like her previous ventures, Rima Das serves as the editor, cinematographer and production designer, in addition to writing, directing and producing. The result is strongly personal and expressive. 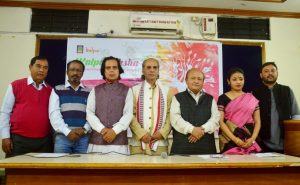 Kalpa, a society for promotion of literature, art, culture and social harmony, introduced their new venture Kalpavriksha - an institute for the holistic learning of Sattriya tradition during a press conference held at the Guwahati Press Club, recently. The announcement was made by Dr. Anwesa Mahanta – Artistic Director of Kalpa, in the presence of Bhupendra Prasad Sarma, President of Kalpa, Padma Shri Ghanakanta Bora, Vice President of Kalpa, Prof. Pradip Jyoti Mahanta, General Secretary of Kalpa.

“Kalpavriksha will not be just another dance academy. It will be an institute where students will learn about the Sattriya dance, music, theatre and all other allied traditions. Here, students will get an opportunity to learn about the cultural history of Assam from renowned scholars and cultural exponents. We will conduct masterclasses from time to time, where the students will interact with exponents of the Sattriya tradition and get a deep insight into the spiritual and professional aspects of this art form,” Dr Anwesa Mahanta said, while briefing the media at the press conference.

Eminent maestro Padma Shri Bayanacharya Ghanakanta Bora, who would be offering regular masterclasses to the participants said that the curriculum of the institution has been devised according to the oral pedagogy of the Sattra culture with an aim to introduce the traditional learning practices of Sattriya pedagogy. “This initiative, I believe, would help in retaining the roots of living tradition amidst the younger generation", he said.

“Kalpavriksha will also offer methodological guidance in the field of research in Sattriya music, dance and theatre. The institute will also offer research and internship opportunities for aspirants in various projects of Kalpa,” Dr Mahanta, the Yuva Sangeet Natak Akademi Awardee, added.

Adding to Anwesa’s statement, Prof. Pradip Jyoti Mahanta said, “Kalpavriksha will also conduct intensives and residency opportunities in various creative projects under the supervision of internationally acclaimed artistes. Besides, the students will also get opportunities to perform in the repertory unit of Kalpavriksha, after the completion of the course, thus ensuring that their talent and art reach the right target audience.”

Established in 2008, Kalpa has envisaged a series of activities as part of its objectives. The society has always thrived to promote Indian arts and dance, particularly amongst the youth. At the same time, with its cultural and academic activities, the members have tried to promote the rich heritage of arts prevalent in Northeast India, with special emphasis on Assamese art and culture. With its activities, the society has promoted the ideals of peace, harmony and bonhomie with the aesthetics of Indian arts. The activities of Kalpa have received accolades from various art connoisseurs. One of their major cultural events is the Pragjyoti International Dance Festival, which celebrated a decade of its glorious cultural journey this year. The members of Kalpa believe that Kalpavriksha will be a major boost towards realising the vision and mission of the society.

For details of admission, aspiring students can email Kalpavriksha at kalpavriksha.kalpa@gmail.com or call at +91 7002579773.

People of Assam based in the national capital region were regaled by a unique performance – ‘Galpa Katha’ – a storytelling performance presented by poet-writer Atanu Bhattacharya and vocalist Mitali De, on February 16.

The programme, organised with the aim of popularising Assamese literature across the country, was held in conformity with the foundation day celebration of the Assam People’s Welfare Association (APWA), an organisation representating the Assamese community based in Noida and the adjoining areas of the capital region.

The ‘Galpa Katha’ covered renditions of popular Assamese stories, blending storytelling with music. Journalist Paragmoni Aditya was the chief guest in the event during which the founders of the organisation were also felicitated. 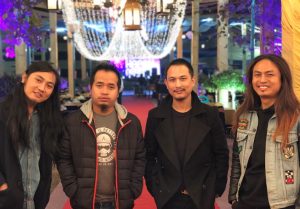 Manipuri Band Traffic Jam recently performed at the 4th edition of India’s biggest world music extravaganza - Udaipur World Music Festival 2019. The band performed on the concluding day of the three day festival that was organized from February 15 to 17 at the Gandhi Ground, in the city of lakes, attended by patrons and music lovers from all over the world. Organised by the seasoned event company Seher, this music celebration united global artistes and bands from over 20 countries, including Spain, Italy, France, Cuba, Brazil, India, Iran and many more.

The Manipuri band engaged the packed audience with their energetic and lively performance, followed by acts like Natig Rhythm Group from Azerbaijan and the Delhi-based rock band The Local Train.

Traffic Jam is a decade old band comprising of members from the north east of India, who met in the capital city of Delhi. The band strives to pay tribute to the Rock Gods and Anthems they grew up with, in their home ground. Heavily influenced by life, love and rock, their name speaks for itself, something everyone faces in every aspect of their life. The 4-member band consists of Jimmy Thang (Vocal/ Guitar), Kennedy Singh (Guitar), D.S. Mung (Bass) and Stevekid Valte (Drums). As an ‘all-genre’ band, its root goes down to the basic strong foundation of each of the members, who are all passionate practitioners of music.

The Udaipur World Music Festival is an annual festival which is conducted every year at the same time, featuring unparalleled live performances with the city of lakes as a background and celebrates cultural diversity at its best. The festival also features the local Rajasthani talent and gives a valuable platform and exposure to the local artists and the people of Rajasthan, and has well spread out venues to provide a holistic experience to the music lovers travelling from across the world, where energetic youthful music brings together people from all age groups and sections of society.

Founded in 1994, by Sanjeev Bhargava, Seher, literally meaning ‘breaking of the dawn’, was founded with the vision of taking Indian culture to a large number of people, not just to a small cultural elite. In the last 15 years, Seher has become one of the most highly regarded organisations in the arena of performing and visual arts – both for the diversity of performances as well as for the unusual manner in which they were conceived. Its events have been repeatedly described as historic, innovative and radically different.