This year, Bhasha Sanskriti Milan Utsav 2019, that took place from February 21 to 25, chiefly comprised of three main events - Ekkushe Samman, Kobitar Anusthaan, and an art exhibition titled ‘Jugalbandi’ in addition to a live performance by the noted folk band Dohar. The special celebration on February 23 kicked-off with an art exhibition titled ‘Jugalbandi’ presented by noted fine arts artistes from Bangladesh - Jamal Hossain and Abida Hossain, which perfectly captured the individuals’ passion and strength, followed by a scintillating live performance by the Kolkata-based folk band Dohar, which has played a significant role in popularising Bengali and Assamese folk music.

The art exhibition was graced by the eminent artist Noni Borpujari, noted singer Manisha Hazarika, Usharanjan Bhattacharya, Assistant High Commissioner and Head of Mission, Bangladesh High Commission, Dr Shah Mohammad Tanvir Monsur, Hasan Arif, among others. On the occasion, Borpujari recalled being profoundly enriched by a trip to Bangladesh, which possesses a diverse and extremely rich folklore, art and cultural heritage. “I consider myself extremely fortunate to witness Jamal Hossain’s art work for the first time, and they are a testimony to his wonderful artistry,” said Dr Monsur. “I can never forget how India stood with Bangladesh during the Liberation War. We are eternally grateful to India for that. On that good note, we have always maintained cordial relations with the country and its regional players.

Off course, I would like to offer my special thanks to Byatikram and its President Dr Saumen Bharatiya, who has been playing a pivotal role in deepening our relationship with Assam for so many years now,” said Hasan Arif. Dr Bharatiya on his part spoke about the importance of organising an event like Bhasha Sanskriti Milan Utsav on the occasion of Mother Language Day, which has now stepped into its 13th year. “Even organisations like the Asam Sahitya Sabha and the Karbi Anglong District Sahitya Sabha have been observing Mother Language Day, which has gained broad appeal and momentum with people hailing from different backgrounds,” he added. The noted guests Bidhan Dasgupta, Manoj Rai, Udayan Biswas, Dipankar Kar, Bangladesh’s Sheela Mustafa and Munni Saha, among others, were felicitated on the occasion.

The special segment of the cultural evening - Kobitar Anusthaan, saw the participation of noted artistes from the neighbouring country. The day started with a sitar recital by Debidatta De of Guwahati. De, who completed her BMusic degree from Kolkata, Allahabad and Lucknow universities, kept the audience at the Pragjyotish ITA Centre spellbound with her dexterous display of sitar playing. The talented artiste, who is training under eminent sitar exponents Prodyumna Das and Indra Konwar, has already performed in a series of musical concerts and cultural evenings in various places, not just in the State, but also in various parts of the country. Debidatta De’s distinct style of playing is a development of the Maihar gharana school of playing to which her first guru, the eminent exponent of sitar Prodyumna Das, who was a disciple of Pandit Ravi Shankar, belongs.

The awarding of the ‘Ekkushe Samman’ is a tradition that recognises the most eminent scholars, who have contributed immensely in safeguarding their respective mother languages. The award acknowledges the committed endeavours of people striving to promote the significance and awareness of mother languages and cultural diversity. This year, the Ekkushe Samman was presented to five individuals for their exceptional contributions in their chosen fields of work. Veteran film producer Shankar Lal Goenka was awarded - for his influential work in the social sphere, popular actor Jatin Bora - for his contribution to Assamese Cinema, Dr Maniklal Bhowmick - for his work in the field of literature, Nibedita Tarafdar, a well-known dancer, for her contribution to the field of theatre and dance, and Sankha Subhra Devbarman, Regional Director, Ministry of Tourism, Govt. of India, for his contribution in the field of Literature.

On the occasion, a tribute function dedicated to the memory of renowned folk singer, researcher and co-founder of the band Dohar, Kalika Prasad Bhattacharya took place with the keen participation of a number of people, including his better-half Ritacheta Goswami, his daughter Ashabori Bhattacharya, Nandini Chakraborty, among others.

The range of programmes also coincided with a book release function. No event organised by Byatkram MASDO is complete without a book release. ‘Boguli Pokhi Aru Haramai Bhattrita’, written by Jamal Hussain, and Mangala Bhattacharjee’s ‘Moner Akashe’ was released on the occasion. An MOU signed between the Asam Sahitya Sabha and the Bangladesh Sanskritik Mancha Guth took place on the final day of the event.

It has to be mentioned here that the people of Bangladesh, who fought for their right to speak their mother tongue, have been celebrating February 21 as the Mother Language Day since 1952, when students sacrificed their lives for the recognition of Bengali as one of the state languages of Pakistan. In 1999, UNESCO declared February 21 as the International Mother Language Day, when a draft resolution, tabled by the Bangladesh government, was unanimously adopted during the plenary meeting of the UNESCO General Conference, proclaiming the day as the International Mother Language Day.

Besides creating awareness on the need to preserve and promote one’s mother tongue through the medium of literature and performing arts, Byatikram MASDO has also stressed the importance of cultural diversity and at the same time, find some underlying common elements which unify the diverse cultures of India and Bangladesh. 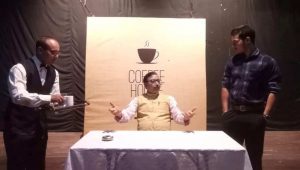 On the occasion of 75th anniversary of Indian Peoples' Theater Association (IPTA), a theatre festival, organized by its Assam chapter, was held on March 11 and 12, 2019, at the District Library, Guwahati. The festival saw two plays on both the days - ‘Lal Churni’, produced by IPTA, Assam and directed by Kandarpa Mahanta, and ‘Coffee Housot Apeksha’, produced by Aikyatan under the direction of Prodyut Kumar Deka.

A Hindi play, ‘Coffee House Me Intezar’ was adapted into Assamese by eminent playwright-actor Durgeswar Borthakur, which was originally written by Laxmi Narayan Lal. The play revolves around a conversation that took the shape of a discussion ending up in an argument. The play opens with two characters in a coffee shop; Nirmal, a 47- year old man who had been a part of the freedom struggle and Vishal, a college going student. Both the strangers are waiting for their respective friends at the coffee shop. Nirmal, who was a part of freedom struggle, is a person with a long list of ethics, values and also many stories of freedom struggle. Basically, Nirmal always lives in the past. On the other hand, Vishal is a young boy who believes in the present and lives it enthusiastically and with fun. Another character is the waiter of the coffee shop who represents a common man and its struggle with life.

As the three strangers began talking with a small conversation, Nirmal narrates his experiences as a fighter in the freedom struggle and Vishal tells him about what he does all day and how much he enjoys his life. As the strangers began talking about things as well, Nirmal begins to tell Vishal as to how the country finally gained its freedom, and that now, all the Indians could live as proud, free human beings. But Vishal had some contradictory views as according to him, all the social evils and other problems like unemployment, corruption, illiteracy, poverty and many more are still the same. At the end, Nirmal agrees, with Vishal ending the argument. 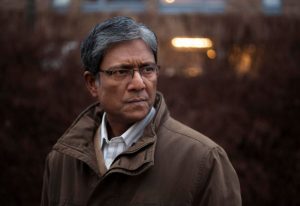 Adil Hussain’s new film ‘Ek Betuke Aadmi Ki Afrah Raatein’ will have its world premiere at the Toulouse Indian Film Festival on April 12. The film is the story of dehumanised existence of a man named Gulmohar and his dispossessed consort Anita, until he finds love in Gomti. Apart from Hussain, the film stars Archanaa Gupta, Mia Maelzer, Rajveer Verma and Raghav Jhingran. The film is directed by Sharad Raj.

Produced by Sharad Raj, Saleem Javed and Zaheer Ahmed, the film is also known as ‘Joyous Nights of A Ridiculous Man’. This year, the Toulouse Indian Film Festival will be holding its 7th edition from April 10 to April 15. The festival helps in the promotion of Indian films in France and is held in Toulouse, a city situated on the banks of River Garonne, and is also the centre of European aerospace industry. 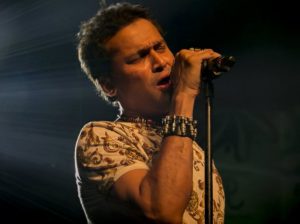 Popular singer Zubeen Garg has been honoured with the ‘Purushottam Das’ award by the organising committee of Barpeta Chawalkhuwa Mahotsav recently. A pioneer of modern Assamese music, Purushottam Das is known for his preservation, promotion and popularisation of Assamese folk music. “I am overwhelmed on being conferred with the award,” Garg said, adding, “I would like extend my love, gratitude and best wishes to the people of Barpeta.”