‘Suspended Inspector Boro’ off to a Flying Start

Amidst thundering applause, Assamese film ‘Suspended Inspector Boro’ witnessed a houseful premiere on December 6, at the Carnival Cinemas in Beltola, Guwahati. The film got released across theatres in Assam on December 7.

The film, by the team of successful Assamese films ‘Local Kung Fu’ and ‘Local Kung Fu 2’, is a serious action thriller starring actor Utkal Hazowary in the title role. The basic acting ensemble has remained largely the same; it’s just the characters and their situations that have been reshuffled.

Written and directed by Kenny Basumatary, ‘Suspended Inspector Boro’ is also releasing in the metro cities, depending on cooperation from multiplexes outside Assam, on December 14.

The film is jointly produced by Bhishan Rai, Priyama Goswami and Kenny Basumatary. “I must thank and congratulate the team. We have managed to greatly raise our production values this time. The fight scenes are a tad more realistic than in the past. We have broken a lot of stuff in this film. Hope the public enjoys the experience,” said director-actor Kenny Basumatary after the premiere.

Speaking about ‘Suspended Inspector Boro’, filmmaker Bhaskar Hazarika, of ‘Kothanodi’ fame, said: “I am thrilled to see Kenny’s new film getting a wide release in the State. It’s an entertaining Assamese martial arts film but with a script that is conscious of gender and other social issues of the day. I urge people to watch the film in their nearest cinema hall.”

“We are glad to see this level of interest among the filmgoers for an Assamese film. From the audience reaction at the premiere, we can easily say that ‘Suspended Inspector Boro’ will be a hit. We at Carnival Cinemas, are proud to play host to your entertainment,” said Ratul Pachani, CEO and managing partner at Matrix Mall, Carnival Cinemas, Beltola.

The plot, written by Kenny Basumatary, starts with Inspector Boro already suspended for bashing up a highly connected gang. A preview of the sequence was already released on YouTube which went viral. Inspector Boro gets a call from an SP who asks him unofficially to find a girl named Sabrina Rai, who’s gone missing three days ago. She was taken from her Udalguri village to Guwahati on the pretext of job training, but now her phone’s been switched off for three days and she’s vanished. Inspector Boro heads to Guwahati and fights his way to the truth. Interestingly, Kenny is playing the main villain, Inspector Lokkhi Modon Jwala.

The cast of artistes also include Eepsita Hazarika, Sarmistha Chakravorty, Mrigendra Konwar, Montu Deuri, Suneet Bora, Mumbai-based Poonam Gurung, who is a new addition, among others.

An eclectic mix of songs have been composed for ‘Suspended Inspector Boro’ – ‘Mukto Aakax..’ by rising star Shankuraj Konwar (sung by Eepsita Hazarika), ‘Aaji Kiyo Janu..’ by Utkal (a duet with Sarmistha Chakravorty), a rap track on garbage management, sung by Bonny Deori and a hard rock piece by Derrick Correia and Anisha Saikia. The first three songs have recently been released on Youtube to great response. The background music and sound design are being done by Marathi Filmfare award winners Utkarsh Dhotekar and Ranjan Pattnayak respectively.

A Hindi version of ‘Suspended Inspector Boro’ is also being prepared. All the scenes were shot twice – once in Assamese and once in Hindi. The Hindi version is expected to be ready in January next year. Director Kenny says, “I hope Assamese people will help spread the Hindi version among their non-Assamese friends.”

‘The Game of Chess’ Successfully Staged

Aikyatan, a premier amateur club of Guwahati, presented its new play ‘The Game of Chess’ successfully on 2 December, 2018, at the intimate auditorium of Surjya in the city. The play, originally written by the Chicago based playwright Kenneth Sawyer Goodman, has been translated into Assamese and directed by filmmaker Prodyut Kumar Deka.

Playwright Goodman is basically known for his work in the Little Theatre movement and his most well known play was ‘The Game of Chess’, which has appeared in several anthologies. The play, set in former USSR, centers around a wealthy Governor who tries to prove himself by risking his life by meeting an anarchist who wants to kill him. He instructs his guards to bring the anarchist into his chamber without being searched. The revolutionary peasant, surprised by the act, appears before him with a vengeance. They start talking with each other, which appears as if they are playing a game of chess. Both the characters, belonging to two different ideologies, try to outdo each other just like in a game of chess. However, the Governor proves to be too wily in the end. He belongs to those bourgeois, who could shut down the voices of dissident with his confidence and cunning.

The two characters were superbly played by Mridupaban Dutta (Governor) and Mrinal Das (Anarchist), and well supported by Hemchandra Pathak (an aide of the Governor). The intermingle of light and dark shadows by Puna Kalita along with a taut background score (by Aikyatan) added to the smooth flow of the suspenseful drama. The settings by Namrata Dutta and makeup by Babi Chakrabarty were effective and appropriate. We look forward to more such interesting dramas from Aikyatan in the coming days. 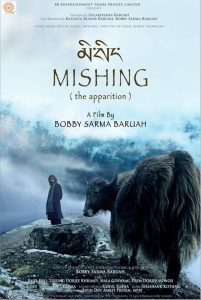 Bobby Sarma Baruah’s ‘Mishing’ (The Apparition) was recently screened in the Special Focus Section of the 23rd International Film Festival of Kerala, which took place from December 7 to 13, in Trivandrum, Kerala. Based on Sahitya Akademi awardee Yeshe Dorjee Thongchi’s novel, the film, a suspense thriller that intermingles the spiritual and the supernatural, explores the myths and legends of the Sherdukpen community in Arunachal Pradesh, while it makes an earnest attempt to preserve its dialect which is on the verge of extinction.

Shot in the scenic locations of Arunachal Pradesh, the film talks about driver Singh, a Manipuri deserter, who grows roots with Arunachal’s exotic Sherdukpan community, suddenly disappears one day, only to resurface after decades and once again vanish behind a curtain of curious questions. The film also refers to a local belief about spirits of dead people appearing and trying to communicate with their loved ones.

Filmmaker Bobby Sarma Baruah took almost two years to research and get familiar with the culture. The music, aesthetically compelling, has been used in keeping with the local culture and traditions, and it’s the villagers themselves who have sung folk songs in the film. The film also contains Buddhist chants that they are used to practicing.

The film, which had its world premiere at the Kolkata International Film Festival 2018, is produced by Sulakhyana baruah and co-produced by Basanta Kumar Baruah and Bobby Sarma Baruah. The casts of artistes include Rajib Kro, who appears as the protagonist, Tsering Dorjee Khrimey, Mala Goswami, Prem Dorjee Monoj, etc. The film’s cinematography is by Sonu, music is scored by Shashank Kothari, sound designed by Rahul Rabha and the editing is by Ratul Deka.

Season 4 of North East’s got Talent to Beam Soon

After achieving success with the show titled ‘North East’s Got Talent’ (Season 1, 2 & 3), a multi-talent reality TV show, Sanchita Production has again started the Season 4 of the show, which is going to be telecast at the Rengoni Channel. It is a talent show that features singers, dancers, musicians, jugglers, riders, actors, magicians, comedians, fine arts artistes (drawing, painting), and other such performers of all ages starting from six to sixty, competing for a number of lucrative prizes and gift hampers. It will be showcasing performers from across the region with a promise to bring amazing and never-seen-before talent and entertainment to the audience. A true celebration of the North East spirit, this long series offers an opportunity on a platter to amateurs and hopefuls wishing to strut their stuff on stage. Directed by director-actress Sanchita Talukdar, the reality show is divided into different segments like Audition, Mega Audition, Quarter Final, Semi Final, Finale and Grand Finale. The Guwahati audition is scheduled be held on December 23, 2018 at Kamrup Academy, Guwahati Club, Guwahati. To participate in this mega reality show, one can call 8011987870. The entire concept and idea is by Jyoti Kakati, the producer of the show.