In 2016, noted senior political journalist and writer Jitumoni Bora brought out a book that takes an objective inquest into the true nature of journalism in Assam, uncovering a number of concealed truths and stories. Based on his own experiences over the years, his book - ‘Siyahir Rong’, enabled readers to have a refreshing look at the field throughout the 312 pages of the searing novel. The astonishing lengths to which he traversed to unfold the truth behind the façade impressed many, most notably distinguished litterateur Dr Lakshmi Nandan Bora, who found his novel intriguing and exceptional. Modern journalists can actually borrow a leaf out of his work.

Revolving around a daily newspaper, its owner and an honest journalist, this lively story, penned by an active journalist, will now be turned into a movie by yet another journalist. The film’s script, too, is being written by a journalist, as is the dialogue. What’s more, the central role will also be portrayed by an established journalist.

Journalists have had to undergo a lot of dilemmas and pressures in the work place. They have always been objective and neutral in their assessments of various issues, be it political or social. They have regularly been exposing the government and the bigwigs of society, indulging in various corruption and immoral practices. However, the problems mostly stem from the fraudulent misuse of power by the newspaper proprietors for their own ends. A number of journalists, vulnerable as they are, are exploited and oppressed by their superiors and newspaper owners, who hold them on a tight leash. Journalists have no option other than to keep quiet or pander to the wishes of their superiors for fear of losing their jobs. It’s an all-pervasive issue faced by journalists everywhere, including Assam.

Journalist Sasanka Choudhury - the main character of ‘Siyahir Rong’, has to face the ire of the government and is sentenced to a jail term for refusing to compromise with his ideals. On the other hand, journalist Simanta Saikia fights relentlessly against the malicious motives and corrupt practices of his newspaper proprietor. As a watch-dog of his society, he is aware of his responsibilities for the greater good of society. A man of strong convictions and beliefs, he always strives for freedom and truth.

So far, no Assamese film has ever been made or for that matter, no Assamese novel has ever been written that genuinely discloses the dark side of the Fourth Estate – its hidden truths. After reading the novel, filmmaker Prodyut Kumar Deka evinced a lot of interest to make a film based on the subject. He has already made quite an impact with his films ‘Dhunia Tirutabur’, ‘Samiran Barua Ahi Ase’, ‘Surjyasta’, among others. But very few are aware of the fact that he has also made a name for himself as a cinema journalist. Prodyut, who has also penned the script of ‘Siyahir Rong’, is quite excited to be working on this project, like everyone else.

The role of Simanta Saikia will be portrayed by popular cine-journalist Bidyut Kumar Bhuyan, who will be making his cinematic debut. He will be pitted against popular actor Jatin Bora, who will play the role of Sasanka Choudhury. The film will also feature artistes like Towfiq Rehman, Arun Nath, Mrinal Das, Mridupaban Dutta, Melody Patgiri, Debika Priyam, etc. The new film is all set to start production early next year.

‘Kokaideu Bindaas’ to Release on February 8 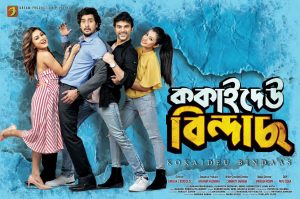 The poster and the official website of new Assamese film ‘Kokaideu Bindaas’ was formally released by actress Geetawali Rajkumari and Angoorlata Deka, the popular actress and BJP MLA, at a function held at the Hotel Starline in Guwahati, recently. The film, made under the banner of Dream Production, is directed by Dhrubajyoti Bordoloi. The film’s executive producer is Anupam Hazarika.

What really ensues when two brothers, who are seemingly poles apart, come face to face after a long time? Will they find enough reasons to stand by each other? Will love manage to triumph all odds?

‘Kokaideu Bindaas’ depicts the life of two brothers in a most unassuming way. The story deals with issues of commitment, priorities in life, longing, and sense of belonging. “When this story was narrated, I felt, I could take this story forward and create a film, which will give the audience some insights about life and its priorities,” Dhrubajyoti said.

The film’s shooting has been done in various locations like Guwahati, Tezpur, Sivasagar, Shillong, Cherrapunji, Bengaluru, etc. The music is scored by Manash Robin, cinematography is by Papu Deka and art direction is by Bhaskarjyoti Kalita, while Chinmoy Sarmah is the film’s creative director and story-writer. The film’s music is scheduled to be released on January 3.

Romantic Melody with a Seventies Feel 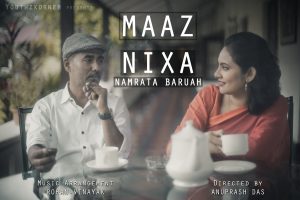 A newly released Assamese video song, ‘Maaz Nixa’ has been able to acquire a lot of popularity on the social networking sites like Facebook, YouTube, among others, due to its completely different concept and technique.

Beautifully rendered, written and composed by Namrata Baruah, the song is musically arranged by Rohan-Vinayak, while its recorded by Smitesh Joshi, Kunal Dabholkar and Anish Nair at the Sound Good Studio, Mumbai, and mixed and mastered by Kunal Dabholkar.

This romantic melody with a 70s feel, has tapped into a common if not universal emotion - longing. The music video has been conceived while keeping the essence of the song in mind. It takes every music lovers back in the times of movies like ‘Chameli Memsaab’ and ‘Rajnigandha’. Tea planters of Assam, particularly around that time, were known for their luxurious yet secluded lifestyle. Be it the long verandahs that ran around the bungalows, or a butler attending to their whims, or sipping freshly brewed tea out of spotless white cups, everything was filled with panache. The young and talented director Anuprash Das and his creative team have used this as a backdrop and have tried to create a simple yet endearing story. The key roles in the music video have been played by Namrata Baruah and Hemanta Debnath.

Namrata Baruah, a singer, songwriter, based in Bangalore, is a Sangeet Visharad in Hindustani Classical Music and is currently undergoing advanced training under Vidushi Poornima Bhat Kulkarni of the Kirana Gharana. The Bangalore based musician recently released two of her original compositions on the online platforms - ‘Laapata’, her first single in Hindi and ‘Maaz Nixa’, her second single, and her first in Assamese. The video features Hemanta Devnath, Namrata Baruah and Showkat Hayat. Meanwhile, Hemanta has curved his own niche with appearances in music videos like ‘Raanjhana’, ‘Jhumuri’, ‘Tuhu Deeno’, ‘Bohu Nixa’, etc and short films like ‘Xekh Oidhyayi’, ‘Joubone Amoni Korei’, ‘Not My Thing’, etc.

Recently, he has produced a song called ‘Saratar Sondhiya’, and will be making his feature film debut with the forthcoming ‘Ji Golpor Sekh Nai’. 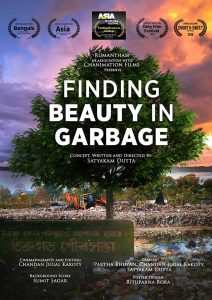 “It is basically a satire on the menace of garbage pollution in general and in the city of Dibrugarh, known as the ‘Tea Capital’ of India, in particular. The film not only mocks at the fragile civic amenities in the city, like lack of garbage bins or total apathy towards cleaning them by the municipality, but also shows the mirror to the people for their habit of littering garbage all over without a second thought,” Satyakam Dutta, the documentary-maker and a 2013 batch IRS Officer, said.

Dutta, who calls it a ‘mockumentary’, said that it was an attempt at sensitising citizens as also the authorities towards better upkeep of the cleanliness of the city of Dibrugarh.