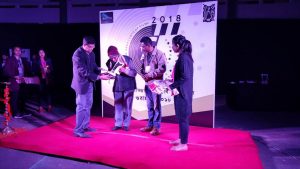 The 15th edition of Adda Short Film Festival 2018, the first-ever open air film festival in Northeast of India, concluded recently at the Jyoti Chitraban (Film Studio) Society, Guwahati. The festival, held under the aegis of ADDA in association with Aucto Creation, featured some fabulous lineup of short films this year that demonstrated the talents of independent filmmakers from far and near. Since 2004, the festival has been celebrating the efforts of new filmmakers, promoting diversity of cultural expressions, holding discussion sessions in order to exchange ideas, information and knowledge.

This year, the festival held discussions on two topics, which enlightened the filmmakers, writers, critics, students and connoisseurs of cinema.

The discussion on the subject – ‘Cinematic Journey of Late Pabitra Kumar Deka’, was participated by an expert panel comprising of eminent writer and former principal of Cotton College Udayaditya Bharali, filmmakers Sanjeev Hazorika, Prabin Hazarika, Hemanta Kumar Das and Mridul Gupta, cine-journalists Apurba Kumar Das, Bidyut Kumar Bhuyan, Utpal Datta and Arunlochan Das, art director Phatik Baruah, among others. Pabitra Kumar Deka’s name is forever etched in the state’s cultural scenario. From making writings on cinema or theatre an integral part of journalism in this part of the world, particularly in the vernacular media, to publishing the pioneering cultural magazine – Roopkar, or instituting the first film awards in Assam way back in 1975, the Roopkar Awards, he broke new ground with each of his enterprise.

On the other hand, the discussion on the topic – ‘New Thinking New Films’, was participated by several rising filmmakers and technicians including Deep Choudhury, Himjyoti Talukdar, Manjul Baruah, Jhulan Krishna Mahanta, Kangkan Deka, Debajit Gayan, Indranil Kashyap, Sourav Mahanta, Khanjan Kishore Nath, among others. The sessions were anchored by Amar Deep Gogoi, President of the festival. The festival has certainly proved to be a happy hunting ground for rising filmmakers and technicians, film buffs and enthusiasts to meet, make new acquaintances, discuss film techniques and exchange ideas as memories and wisdom are gained by sharing and learning.

The Jury, comprising of Utpal Borpujari, Deep Choudhury and Bhaskar Jyoti Das, adjudged Chandra Shekhar’s ‘Murti’ as the Best Film in the fiction category. While ‘No’ (The Home), directed by Sujit Debbarma and Pranab Jyoti Deka, bagged the Best Documentary award, the award for Best Animation Film was presented to Kankan Jyoti Borthakur’s ‘Bhoot’, and the Jury’s Special Award was presented to ‘Fade In’, directed by Ankur Jyoti Deka. 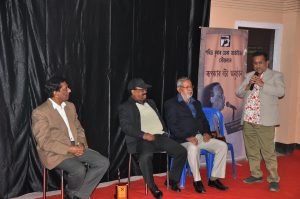 There are few who haven’t heard of Pabitra Kumar Deka. He is the man behind making writings on cinema or theatre an integral part of journalism in this part of the world, particularly in the vernacular media. He was the visionary behind the pioneering cultural magazine ‘Roopkar’ and instituting the first film awards in Assam, the Roopkar Awards, back in 1975. He was also a famous satirical litterateur, editor, drama critic, prolific writer of essays and compositions, director of TV serials and documentaries, etc.

One of his most outstanding accomplishments was his realisation of the historic value of every published article, book or photograph related to cinema. Last year, the much anticipated Pabitra Kumar Deka Archive – a first of its kind, was declared open by Kanak Sen Deka, eminent litterateur and former president of the Asam Sahitya Sabha. A priceless repository of information of Assamese cinema, the archive he has left behind comprises of books, magazines and periodicals on films, still photographs, cassettes, CDs, VCDs, which have been systematically preserved.

Recently, the Roopkar Awards, instituted in the memory of this distinguished cine-journalist and litterateur, was confered on Samarendra Narayan Dev, noted writer-director of popular films like 'Aranya', 'Putala Ghar' and 'Sonar Harin' for the year 2017, and Tapan Das, a prominent photographer of Assam, who started PVTI, a leading photography institution, for the year 2018. The awards were given away by distinguished educationist and ex-Vice Chancellor of Gauhati University, Dr. Amarjyoti Choudhury. The programme, anchored by National Film Award-winning film critic Utpal Datta, was graced by a number of noted film and media personalities, film enthusiasts among others, including Udayaditya Bharali, Kopil Bora, Sanjeev Hazorika, Prabin Hazarika, Namrata Datta, Bidyut Kumar Bhuyan, Jitumoni Bora, Hemanta Kumar Das, Mrinal Das, etc. 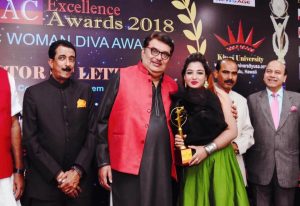 She has built on her fame to debunk the stereotypical concept of beauty as slim or zero size. As they say, beauty comes in all shapes, sizes and colours. For Assam-born Progyashree Hazarika, what really matters more than being slim is being fit and healthy, be relatable and stand upright in the world's eye. Its her confidence and a positive attitude that makes her stand out from the others.

Recently, Progyashree was honoured with the Iconic Woman Diva Award during the 89th All India Achiever’s Conference and Iconic Woman Diva Awards function, held at Hotel Samrat in New Delhi. She is also the brand ambassador and coordinator of Anti Corruption Foundation of India, a registered institute, which is working for the awareness of eradicating corruption across India and awareness of traffic rules. The foundation also honoured Progyashree with the Asia Pride Award. She received the award from well-known actor Raza Murad in a function held at The Vivan Karnal, located in Haryana.

A Star on the Horizon 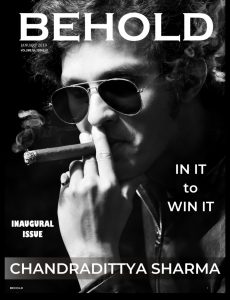 It was Chandradittya, who launched the Amitabh Bachchan Fan Club in Guwahati for the first time. He has appeared thrice in Kaun Banega Crorepati (KBC), the popular Indian television game show, and was felicitated in many shows and functions. He was one of the many participants in the latest edition of KBC. Chandradittya also presented his book to the the megaster during the show. Infact, he visits Mumbai to wish Amitabh Bachchan on his birthday every year. He has accumulated a pile of VCDs, magazines, books, novels and posters over the years. He was also a part of the reality show ‘North East Got Talent’ and has also performed in the Prag Cine Awards in Tezpur. An MBA and a Mass Communication student from NDTV, Chandradittya has also done a diploma course in acting from Cadence Theatre, Mumbai. Recently, he has also appeared in the cover of a new magazine - Behold. Presently he is trying his luck in the entertainment world of Bollywood. He has written reviews for a number of Bollywood films for various youtube channels. He has also acted in a comedy web series – ‘Masti Ki Paathshala’, a Dhanashree TVC ad, a short film and three plays – ‘Sasur Damad’, ‘Baap Lao Lakho Pao’ and ‘Court Martial’. He is the son of Arabinda Sarma and Pranati Baruah of Beltola, Guwahati.