‘Kaneen’ To Release in March 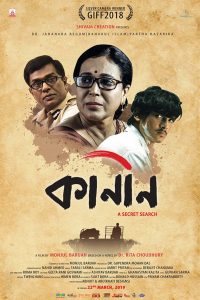 Following the footsteps of his famous uncle Jahnu Barua, who has laid a solid foundation upon which Assamese cinema could grow and flourish, Monjul Baruah is now recognised as one of the most engaging filmmaking talents to have emerged in the State. His first feature film ‘Antareen’ (2016) - a women-centric, dark psychological story by noted writer Dr Rita Choudhury, impressed critics and audiences alike. Monjul Baruah joined a growing list of new wave filmmakers who are simultaneously expressing and developing their own cinematic vocabulary. The film, cited for its sensitivity and powerful storyline, was adjudged the Best Feature Film award at the 3rd Indian Cine Film Festival in Mumbai in 2015.

Monjul is now back with his second film ‘Kaneen’, revolving around human relationships and the issues of social justice, focussing yet again on a strong female protagonist. The interest in the movie was overwhelming, and it did not take too long for the critics to take note of this film at the festival circuit where it has garnered plaudits. ‘Kaneen’, which is also based on a novel by Dr Rita Choudhury, has recently bagged a major award, winning the Second Best Feature Film award of the North East at the 2nd Guwahati International Film Festival 2018. The film certainly proved that Monjul is doing more than simply carrying on a family tradition.

“My first film ‘Antareen’ was also based on Dr Rita Choudhury’s novel and it gained popularity among the masses,” Monjul said. It was quite a challenge to turn a piece of literature into a visual presentation. “I always have a feeling of fear if I can do full justice to her writings, in a film,” he adds.

An Assamese word, Kaneen stands for the children born out of wedlock. The story is about the deep-seated guilt experienced by the wife of a high-profile police officer following an encounter with an abandoned infant, which triggers off a series of happenings, compelling the woman to obsessively track down her own abandoned child, born out of premarital momentary passion. But her efforts to bring him back to her life hit the high glass wall that divides them.

The film’s music has been scored by Tarali Sarma, while the songs are rendered by Zubeen Garg, Papon, Nahid, Mahalakshmi Iyer and Shamima Khatoon. The cinematography has been done by Nahid Ahmed, sound designing has been done by Amrit Pritam Dutta, and the re-recording and mixing has been executed by Debajit Changmai. While the art direction is by Rama Roy, Sujit Borah the DI colorist, editing has been carried out by Twenchang, costume designing has been done by Gita Rani Goswami and makeup is by Ashitav Baruah. The film’s chief assistant director is Ghanashyam Kalita, while the assistant directors are Ronald Hussain and Samar Jyoti Sarkar, casting director is Ronald Hussain and production designer is Himen Borah. Shot in the locations of Tezpur, Pandu, Maligaon and Beltola, the film is slated to hit the theatres on March 22. 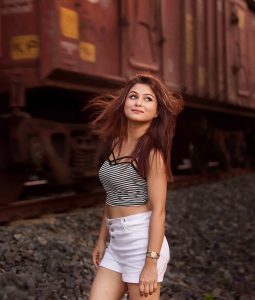 Alishmita Goswami, the beautiful and talented actress, best known for her character Gauri on Rengoni TV’s long-running serial ‘Aaina’, is now all set for her bollywood debut. Alishmita will be making her movie debut in ‘Blackboard Vs Whiteboard’, which is going to release on February 8, 2019.

Directed by Tarun Bisht, this film is based on the Indian education system. The film also features Raghubir Yadav, Pankaj Jha and Dharmendra Singh in prominent roles.

Apart from ‘Blackboard Vs Whiteboard’, Alishmita’s another Bollywood film ‘Brunie’ will be released this year. This film features ‘Pyaar Ka Panchnama’ fame actor Raayo in lead along with Alishmita.

She has also got four Assamese films lined up for release this year – ‘Ulka’, ‘Kokaideu Bindaas’, ‘Dwipen Gandhi’ and ‘Parikrama’.

Assam Chief Minister Sarbananada Sonowal released a DVD – ‘Majulli-O-Majuli’ – exclusively sung and videographed on the river island Majuli recently. The video was released at a simple function held at the conference hall of the Deputy Commissioner Office of Majuli.

The DVD features songs which are written by Anuradha Das and sung by well-known singer Dr. Sangita Kakoti. The Deputy Commissioner of Majuli district, Debaprasad Misra also lent his voice to the songs. The videography has been directed by Anupjyoti Chowdhury. Lauding the efforts of the artistes, Assam Chief Minister Sarbananda Sonowal said the DVD is a good venture in projecting Majuli as an island and epicenter of Vaishnavite culture and a land of harmonious co-existence of people belonging to different faith. Besides the Deputy Commissioner of Majuli, Debaprasad Misra and the Superintendent of Police, Hitesh Chandra Roy, other senior officers of the districts were also present on the occasion.

It may be mentioned that the Majuli Assembly Constituency is represented by Chief Minister Sarbananda Sonowal. Majuli was declared a full-fledged district after the Bharatiya Janata Party (BJP) came to power at Dispur and formed coalition Government with the Asom Gana Parishad (AGP) and Bodoland People’s Party (BPF). 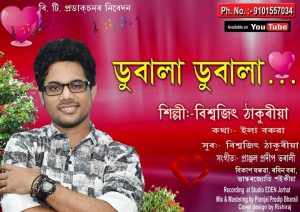 A lot of Assamese songs hit the social networking sites almost on a daily basis, but only a few manage to appease the hearts of music lovers. One such song ‘Dubala Dubala’ has managed to earn the appreciation of music lovers. The song is written by Ila Baruah, tuned by Biswajit Thakuriya and musically scored by Pranjal Pradip Bharali. The song, beautifully rendered by Biswajit Thakuriya, is mixed and mastered by Pranjal Pradip Bharali and recorded at the Studio Eden, Jorhat.

Biswajit Thakuriya always dreamt of being a singer, and with his hard work and passion, he also discovered his passion for song writing and music composition. Some of his previous releases are ‘Majoni’, ‘Moinajaan’, ‘Haal Baang Jou’, ‘Karamker Ratiya’, etc, which also became quite popular. His recent single ‘Dubala Dubala’ has attracted the attention of avid fans and enthusiasts. A romantic number, the song is based on the experinces of real love. The promising singer is busy recording quite a few songs at the moment. One such number is ‘Bajrangi Bhaijaan’, based on Salman Khan’s blockbuster movie of the same title. 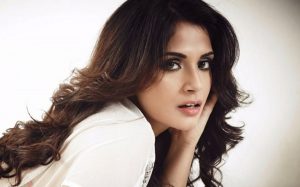 Actress Richa Chadha promoted the importance of theatre at an event in Assam. She was recently in the State on the occasion of Aaina Jibonot Theatre Competition, an annual programme conducted in Guwahati in Assam. She was sharing the podium alongside ace actor Adil Hussain.

Richa said: "It was amazing to meet and see this incredible bunch of talent. They were all amazingly good and had such impeccable performances."