The Problem with the Modern Indian Woman

As I write this, it is almost evening. My friend Parama just left for her hometown. She had a break-up a few days back. It was getting into her, so she took a few days off and went home. It wasn't that this so called break-up came as a rude shock. For months, we had been telling her that this is going to end where so many of her previous affairs did. But like in all others, she continued. The boy just disappeared after stealing her money. And if I may say, a lot of money. Parama is not only heartbroken, but her finances are also weak now. Otherwise, Parama is a smart woman. She did her B School from a top school and now heads the HR department of her company.

It is not only Parama, I met Shona after a year. She had a similar story. And over the time, I have realized that this is the story of so many women. I have often wondered why so many smart women choose the wrong men. Men who cheat, lie, steal and break hearts.

Over the past 10 to 15 years, the Indian economy has taken a drastic turn. Thanks to much needed economic reforms,the women workforce in the country has increased like never before. The money has come to women too, which was before mainly a men's prerogative. Though the money, jobs and education came to table, the basic conditioning of women as a support system to a male has not changed. Definitely we raised young girls to join the work force, but they were still conditioned to be someone's mother, daughter, wife and sister. In India, still no matter how well you are doing for yourself, you are still judged for your relationships.

In the overall picture, Indian women are still not taught to be an individual first. In our five thousand years of civilization, our narratives of women are still confined to women who were someone's wife or daughter. I often wonder, were all women married? If not, where are their narratives? The problem begins when women are taught to be add on and not a full grown human being. Women and children are often clubbed together. And most often the society wants to treat both the same, unless a man validates the woman as his relative. In most part of India, a man's word has much more weightage than a woman's. Most of our narratives tell us how women lie. Just like last year's narrative "Sonam Gupta Bewafahai?" or how in wars men died and women did nothing. These are supposed to be jokes. But they are a part of our narratives. And we forget that all narratives become a part of history and we start believing in them.

We are still not comfortable with women travelling alone or women who choose to be unmarried. A woman is never seen on her own. And that is a problem. A huge one that we refuse to address. Women are supposed to be giving, nurturing and most importantly, silent. The voices in our narratives are men's. Our history talks of men and their valour. We hardy know of many women who showed courage and immense resistance. Our history pages do not recognize them. Little girls read men to be heroes and women are hardly mentioned. Subconsciously, that becomes our story. That we are add-ons. And we start living it.

Let us look at it from a part of rituals. We take up (most of the women) our husbands name. We are supposed to take pride to be a part of "HIS family". His lineage. His ancestors. It also means very subtly that a woman's ancestors don't matter. Her histories don't matter. The moment she is married, she has to glorify another family. As if her own never mattered. These are subtle ways of telling woman, you don't matter, your story doesn't matter unless you take up a man's story. Now that money is on the table, which is definitely a huge thing, we are yet to learn to treat us as equals. I have hardly met woman who ask what they want. We are always, I repeat, always taught to dilute our needs. Patriarchy is an immensely smart business person. It tells us we are not enough, and we buy it standing on the front row. We are told that there is a woman called "too much." She is too thin, too fat, too bossy, too demanding, too slutty and so on. So, from day one we try not to be too much. And we sell our own gifts for crumbs. Unless we stop doing it, no matter how many economic reforms happen, we will repeat the patterns of seeing ourselves as halves to someone. 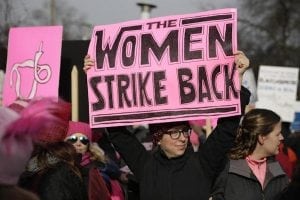 People gather at Judkins Park during the Women's March in Seattle, Washington on January 21, 2017. Led by women in pink "pussyhats," hundreds of thousands of people packed the streets of Washington and other cities Saturday in a massive outpouring of defiant opposition to America's hardline new president, Donald Trump. / AFP / Jason Redmond (Photo credit should read JASON REDMOND/AFP/Getty Images)

I am often asked, why even educated women stay in abusive relationships. I always say, because that is what she knows, to be a part of a man, no matter how good or bad it is. Patriarchy has sold us, the "good women" that only benefit it. The woman who suffers in silence is elevated. Our self-love or self-worth is traded to the amount of sufferings we can endure. The more a woman suffers, the better she is. The woman who self asserts is the home breaker. The other woman. The slut. This is how intelligently patriarchy has sold itself.

Now, coming back to Parama, it is that whole conditioning that she is never enough without a relationship. Like so many of us, we have no clue what an equal relationship entrails. And also, that thing so many women are judged by: their relationships. So many of us are so deeply conditioned to hang in with crumbs rather than asking for the wholesome deal. Woman are yet to be comfortable asking because for years, the imaginary of a woman giving is celebrated.

Patriarchy is just a smart business person. It even made Feminism about male hatred. It is so smart that what was supposed to be for equal rights, Patriarchy is again making it about man. And as I already mentioned, we buy what hurts us, sitting on the front row. If you read upon witch-hunting in India, in most cases witches who were killed, burnt or strangulated are women. Isn't it fascinating how all evil power is in a woman?

Patriarchy sells us crumbs. It tells us we are not good enough. And this narrative of not being enough has helped it to thrive over centuries. The idea right now, is to change the narratives. To bring in stories, where no one saves the Princesses, but she does it herself. The Prince is her friend where both wield the sword and both rest when they choose to. Where the Princesses talks, questions, fallsand rise just like the prince's and her victory too is noted in golden letters. There is no denying the fact that what little girls see and hear they become. Let'stell stories of empowerment, of happiness and choices women are capable of making and also becoming that woman, our girls will learn a new pattern. A new story. And a new dawn for our women will begin. At the end of the day we are all one story caught in a web. Until we untangle one thread at a time, we are all trapped.