Guwahati: This happens to be a dream come true moment for the Indian sprinter Hima Das who found herself star-struck when she met Indian cricket legend, Sachin Tendulkar on Friday.

Hima Das, who recently won the Arjuna Award, took to Twitter and shared two candid pictures of herself along with the Master Blaster Sachin Tendulkar.

She in her tweet mentioned, “Thanks sir for this memorable jersey and some motivational talks which will really help me in my career.”

Das made history earlier this year when she became the first Indian sprinter to win a gold medal at an international track event. 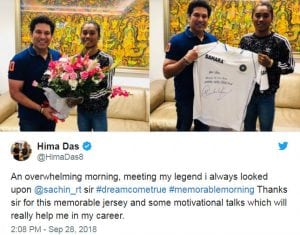 She won the gold medal at the IAAF U-20 Championships in Finland, overcoming a slow start to overtake three competitors in the final 100m stretch.

She also won the silver medal at the 2018 Asian Games before winning the gold medal in the women’s 4 x 400 metres relay race.

Das also won a silver medal in the 4×400 m mixed relay, which was held for the first time at the 2018 edition of the Games in Jakarta and Palembang.

The 18-year-old sprinter on Thursday was declared as the state ambassador for Assam by Assam Government.