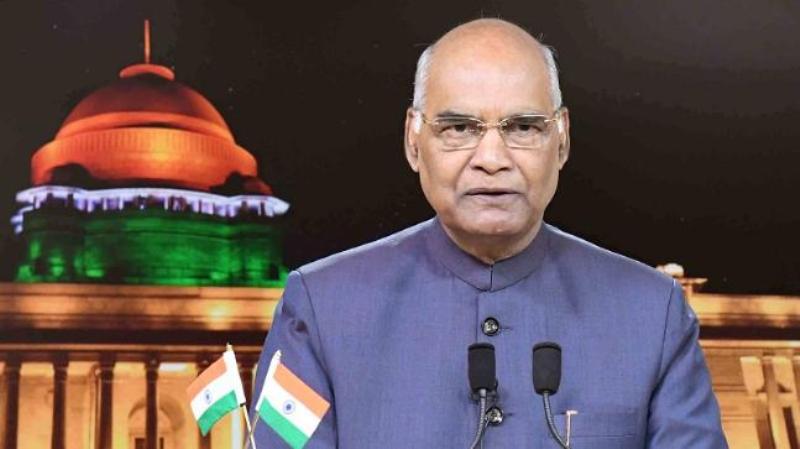 NEW DELHI: President Ram Nath Kovind, here on Saturday, invoked Mahatma Gandhi’s message of truth and non-violence and urged the people, especially the youth, to follow non-violence while expressing concern over a cause and stick to Constitutional methods of achieving social and economic objectives.

“It should be part of our daily routine to introspect on Gandhiji’s message of truth and non-violence, which has become all the more necessary in our times,” said the President in a televised address to the nation on the eve of 71st Republic Day.

His message gains significance in the backdrop of protests, some of them violent, across the country against the new citizenship law. However, he didn’t make a direct reference to protests.

“When fighting for a cause, people, particularly the youth, should not forget the gift of ahimsa (non-violence) Gandhiji gave to humanity. Gandhiji’s talisman for deciding whether an act is right or wrong also applies to the functioning of our democracy,” the President said.

The Government and the Opposition — both had important roles to play — and while giving expression to their political ideas both must move forward in tandem to ensure the country’s development, he said.

Modern India, he said, had three organs — legislature, executive and judiciary — which were necessarily interlinked and interdependent. “Yet, on ground, the people comprise the State. ‘We the People’ are the prime movers of the Republic. With us, the people of India, rests the real power to decide our collective future,” he said.

The President said that the third decade of the 21st Century would be “the decade of the rise of New India and a new generation of Indians.”

He said the next generation remained committed to the core values of our nation. “For our youth, the nation always comes first. With them, we are witnessing the emergence of a New India,” he said.

Recalling the importance of January 26, he said even before Independence — from 1930 to 1947 this day was celebrated as the “Purna Swaraj Day”.

“It becomes easier for us to follow these Constitutional ideals, if we keep in mind the life and values of the Father of Nation. By doing so, we will be adding a meaningful dimension to celebrations of the 150th birth anniversary of Gandhi,” Kovind said and added that as we all march forward, “we remain committed to engaging the global community to build a secure and prosperous future for ourselves and for the humanity.”

Mentioning the Indian Space Research Organisation’s (ISRO) achievement, he said it was making progress towards the Mission Gaganyaan.

On the welfare schemes, he said the ‘Swachchh Bharat Abhiyan’ had achieved huge success. He praised the success of the Pradhan Mantri Ujjwala Yojana, the Pradhan Mantri Kisan Samman Nidhi and expressed the hope that schemes, like Jal Jeevan Mission aimed at water conservation, would soon become popular movements.

Concluding his speech, the President quoted Babasaheb Ambedkar: “If we wish to maintain democracy not merely in form, but also in fact, what must we do? The first thing in my judgement we must do is to hold to the Constitutional methods of achieving our social and economic objectives”.

These words had always lighted our path and they would continue to show us the way ahead to new glories, the President said. (IANS)

Historic Bodo Peace Accord: Several packages announced to boost development of the region
Food for Thought