Silchar is the headquarters of the Cachar district of the state of Assam, India situated around 343 kilometers (213 mi) south east of Guwahati. Silchar is located in the southernmost part of Assam between longitudes 92º24' E and 93º15' E and latitudes 24º22'N and 25º8'N East and is 35 meters above mean sea level. The city is located in an alluvial flat plain with swamps, streams, and isolated small hills marking its landscape. 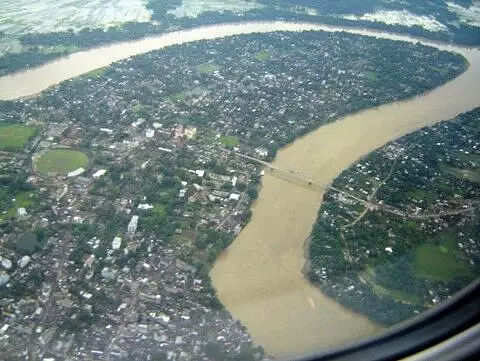 Katigora, Sonai, Barkhola, Udharbond, Dholai, Lakhipur, Silchar are the assembly constituencies factored in Silchar Lok Sabha constituency. This constituency has witnessed 79.40% voter turnout in the 2019 Lok Sabha elections. A total of 14 candidates contested in this constituency. 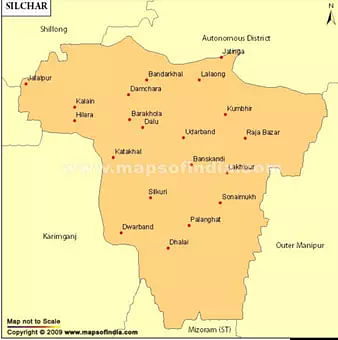 Situated in the southernmost regions in the state of Assam, the Silchar parliamentary constituency is located by the banks of the Barak River, popularly called the Barak Valley. The economy in the Silchar parliamentary constituency is reliant on crops such as tea, rice and other agricultural products. It also survives on limited industry such as paper-making and tea-box manufacturing. However, the Cachar district which is entirely covered by this Lok Sabha seat has been announced as a backward district in the country, being fed by governmental funds under the scheme of Backward Regions Grant Fund Programme.

Silchar is situated in the district of Cachar which is bounded on the east by Manipur, on the north by the district of North Cachar Hills and Meghalaya state on west by Hailakandi district and Bangladesh on the south by Mizoram. The district is situated between longitude 92 degree 15 feet and 93 degree 16 feet east and latitude 24 degree 8 feet 25-degree 8feet north. The total area of the district is 3,786 sq. kms (Rural: 3721. 41Sq.Km and Urban: 64. 59Sq.Km) against the state area of 78,438 sq. kms. So, the present Cachar district comprises an area of 4.8% of the state total areas. The rank of the district among all districts of the state in terms of area is 6th (Six). In Cachar district, there are 2 statutory towns and 17 Census towns. 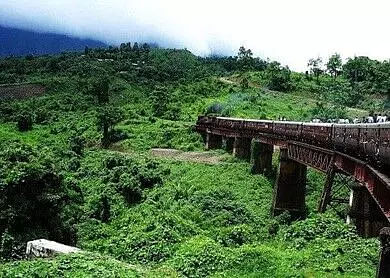 A number of 245 towns is calculated in the whole of Silchar District with a wide range of population distributed unevenly. NO OF INHABITED VILLAGES

There are a total number of 24 inhabited villages in Silchar. 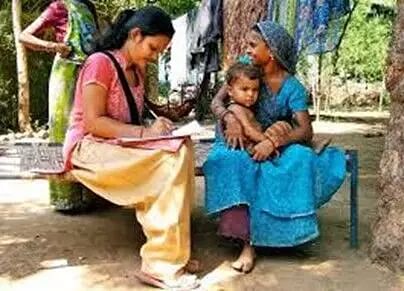 In the 2016 Assembly election, the BJP's Dilip Kumar Paul won the seat receiving 94,787 votes, opposite Congress' candidate Bithika Devi, was able to net only 54,867 votes. The Silchar constituency is expected to go to polls in April or May 2021, as part of the 2021 Assam Assembly election. The Assam Assembly polls will be held to elect a total of 126 Members of the Legislative Assembly (MLAs).

MUNICIPALITY REACH IN THE AREA

Silchar Municipal Board is responsible for the municipal governance of the town. Silchar had been divided into four wards - Janiganj, Ambicapur, Tarapur, and Malugram - but each ward had only 20-50 voters. Situated in the Cachar district of Assam, Silchar is the administrative seat of the district, besides also being a part of the Municipal area of Assam.

RELIGIOUS GROUP/DEMOGRAPHY IN THE CONSTITUENCY

The majority religion in Silchar city is Hinduism with around 154,381 followers. Islam is the second most popular religion in Silchar with approximately 21,759 followers. Jainism is practiced by 1,408 people, Christianity by 1,052 people, Sikhism by 77 people and Buddhism by 39 people in Silchar city. Around 145 people did not state their religion. To measure it in percentage, Hindus contribute 86% of the total population followed by Muslims which contribute 12% of the total population and Jains are the third largest religious community here with 1% population. Female Sex ratio per 1000 male in Hindus are 994 in Muslims are 959 and in Jains are 926. 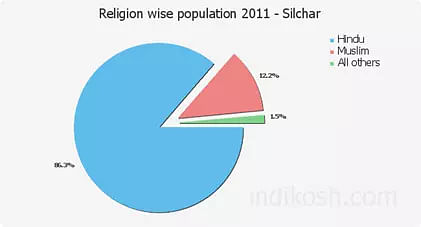 CAST AND TRIBES IN THE CONSTITUENCY 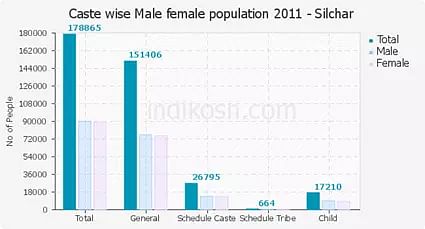 TOP 3 CITIES IN THE CONSTITUENCY

Khaspur, Hajo and Jatinga are three of the major places in the city and excellent tourist destinations.

POLLING PERCENTAGE FOR LAST 3 YEARS (WHICH CONSTITUENCY HAS BEEN THE STRONGHOLD FOR WHICH PARTY AND FOR HOW LONG? WHAT HAS BEEN THE VOTING PATTERN)? 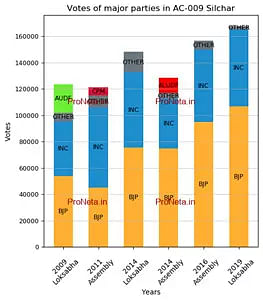 This is the data collected for the election of last five years. 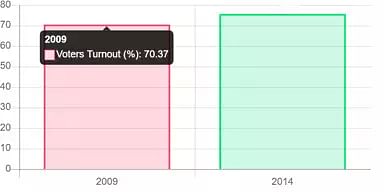 In the 2016 Assembly election, the BJP's Dilip Kumar Paul won the seat in a landslide. He had received 94,787 votes, his closest rival, Congress' Bithika Devi, was able to net only 54,867 votes.

WORK DONE IN LAST 5 YEARS BY THE CANDIDATE

Dilip Kumar Paul an Indian politician and the leader of the Bharatiya Janata Party who is elected to the assembly from the Silchar constituency twice, once in by-election against congress leader Arun Mazumder and another against senior congress leader Bhitika Dev wife of former union minister Sontosh Mohan Dev.He joined BJP in the Cachar District as a Primary Member in the year 1983 and was the BJP Ward President of Ward No.11 of Silchar Town from 1997-2002. He was also elected as Municipal Ward Commissioner from Ward No.11 and placed as the Floor Leader of the party in Silchar Municipal Board in 2009. Selected as the Vice - President of Silchar Town Mandal Committee (BJP) in the year 2010. 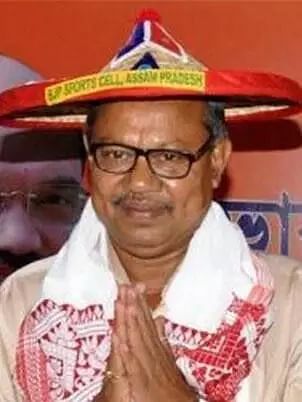 BIG TICKET SCHEMES/PROJECTS ANNOUNCED IN THE RUN UP TO THE ELECTIONS FOR THE CONSTITUENCIES.

These are some of the projects announced by the Government for the Cachar District: