Kaliabor: The Sub-Divisional Officer (SDO) on Monday in a circular notified that due to the inundation of the National Highway 37 at several places near Kaziranga National Park, with water rising upto 3 feet and to avoid any untoward incident, movement of all light motor vehicles have been restricted until further notice.

Also, the Kaziranga National Park (KNP) is on the verge of getting inundated by flood waters that have already submerged several areas of the park.

According to reports, about 80 percent of the park is underwater of the four Ranges, Central, Eastern, western, Burapahar and also the northern range in the past few days. Due to the incessant rainfall in the region over the past few days had resulted in most of the water bodies overflowing and the animals moving to higher reaches near Karbi Hills.

According to officials of the national park, at present water has entered the park through natural channels which is normal; the situation may become extremely critical once water flows over the Brahmaputra embankment. 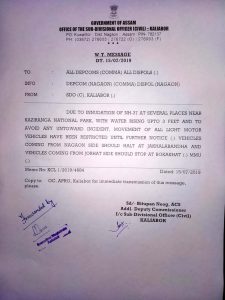 It is to be noted that the Kaziranga National Park Authority, as well as the Civil Administration Authorities, had already imposed speed restriction on the NH-37 that touches the southern boundary of the park, none of the guidelines are being followed so far by the moving vehicles in the area.

There were reports of introducing time card system in the stretch of the national park so that it does not pose threat to distressed animals which try to cross the NH-37 during high floods to reach the higher grounds in Karbi Anglong district, however, sources informed that no such development has been made.

Also Read: Kaziranga on verge of getting swamped due to flood water, Animals heading to Karbi Hills