In his tweet, he called the BJP government "coward and liar" and accused the government of arresting peasant leader and RTI activist Akhil Gogoi; Bhim Army chief Chandrashekhar Azad; activist Deepak Kabir and Sadaf Zafar who was arrested for recording a video of the protests. 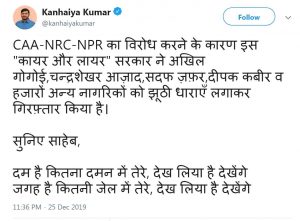 Kumar accused the government of arresting them on false charges due to their participation in anti-CAA-NRC-NPR protests.

The team arrived at his residence in Nizarapar of Chandmari around 7 am. During the raid, the search team seized files containing documents relating to National Hydroelectric Power Corporation Ltd (NHPC), the same company involved in the construction of the Subansiri hydroelectric power project that KMSS leader, Gogoi has been opposing.

Gogoi was leading the anti CAA agitation in upper Assam. He was arrested by the Assam Police on December 12 from Jorhat and later handed over to the National Investigation Agency.