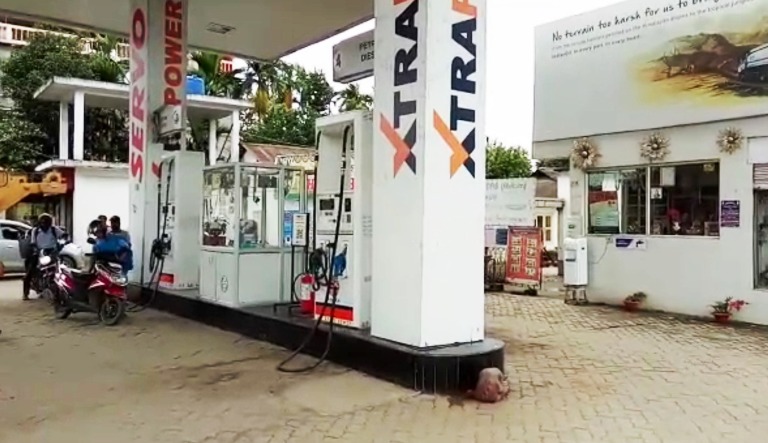 Makum: In a sensational incident, a gang of dacoits loots petrol pump operator at gunpoint in broad daylight near Hukanpukhuri area of Makum Tinsukia National Highway 37 on Monday morning.

As per reports, a petrol pump worker of Makum Mart Petrol Pump in Gandhinagar was on the way to deposit a cash amount of Rs 2.3 lakh rupees at Tinsukia when a gang chased him from the back and reportedly looted him at gunpoint during the morning hours.

Following the incident, Tinsukia Police immediately reached the spot and carried out an investigation in connection to the incident.

A case also has been registered at Tinsukia Police station in connection to the incident.

It may also be mentioned that earlier, a group of unidentified miscreants barged into the Mahavir Cold Storage at Naupukhuri area on last Wednesday evening and threatened the accountants at the gunpoint.

As per sources, the gang of dacoits suspecting of hidden amount Rs 10 lakh at the Mahavir cold storage allegedly made an attempt to loot the cash amount, but, recovered nothing on the spot.

Later, the robbers forcefully collected an amount of Rs 12,500 from the cash box at the cold storage and three mobile handsets and left the place.

The entire incident was caught on CCTV camera of the Mahavir Cold Storage.

Meanwhile, Tinsukia Police had started a thorough investigation into the matter.

A gang of six robbers tried to rob a Maruti Van in broad daylight near Bharbheta Bengali village under Bordubi Police Station in Tinsukia District; however, the attempt was foiled by the smart van driver.

As per reports, the gang of six robbers carrying arms was chasing the Maruti Van in motorcycles, when they spotted by the car driver and accordingly, he exceeded the speed limit which resulted in the robbers to call off the pursuit.

Robbers also open fired targeting the car driver, but, he managed to escape from the spot safely.

It is to be noted that the driver was carrying cash Rs 26,50,000 inside the car, the amount was reportedly withdrawn from Tinsukia Axis Bank on the same day. Moreover, the cash amount was supposed to be distributed amongst the tea garden workers at Mahakali Tea Estate as daily wages.

If we can fly to the moon then we can surely do something about the floods: Adil Hussain
Dhing Express Hima Das creates History, clinched her 5th Gold of the month