Guwahati: The United Liberation Front of Assam Independent (ULFA-I) has claimed responsibility for the five blasts that shook Upper Assam on the 71st Republic Day this morning.

In a press statement, ULFA(I) clearly stated that the serial blasts in the morning hours ahead of the Republic Day celebrations were executed by their group. 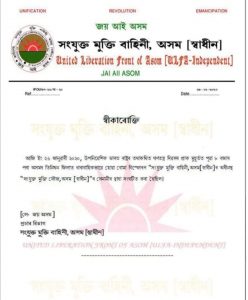