Actor Ranveer Singh took to Instagram to pay tribute to a young fan of his who died recently after he collapsed in his bathroom. The on-screen actor shared a montage of his image to the fan on his Instagram stories and wrote, 'RIP lil homie'. 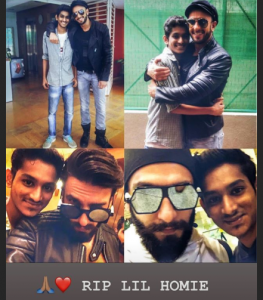 Photographer Viral Bhayani shared a post on Instagram on Monday and uncovered that the man was Jatin Dulera, a vigorous fan of Ranveer Singh. He shared more pics of Jatin with Bollywood actor Priyanka Chopra, Shah Rukh Khan, and Salman Khan.

The photographer revealed that Jatin passed on at his home in Mumbai. "He was just getting ready to go to office and crumbled in his bathroom as his breathing stopped," The photographer wrote. TV actor Riddhi Dogra, Ridhima Pandit, and Bollywood actors Himansh Kohli and Zareen Khan also shared their condolences on the post.

Recently, actor Ranveer Singh showed his support for Mumbai based dance group V.Unbeatable which stunned everybody with their performance at America’s Got Talent. The gathering pulled off some extremely amazing and daring dance moves and earned itself overwhelming applause from the judges and the whole audience.

“Gully boy dancing like Peshwas! World class performers making India proud, fantastic,” Ranveer Singh tweeted on Monday. Along with the tweet, he shared a link of the video where the group is seen performing to Malhaari song from Ranveer Singh-starrer Bajirao Mastani. Prior, even Sonam Kapoor and Varun Dhawan had tweeted in the group’s support.

Ranveer will next be seen in Kabir Khan’s 83. The film is based on the legendary cricketer Kapil Dev, who lifted the World Cup for India in 1983 and also coached the team from October 1999 to August 2000.

Not only that Ranveer has already signed his next film, which is able to be with Yash Raj Films dubbed Jayeshbhai Jordaar, but the film is also an entertainer, set in Gujarat. The film has been written by debutant Divyang Thakkar and will be directed by him as well. The film will be produced by Maneesh Sharma and is predicted to go on floors this October.