Leading with Alexa and other Amazon Women

One company's power-packed lead line creates a model for empowered women and other beings!

"Think BIG,"! It can be a habit with some; even an obsession with others. It is one of the many leadership principals at Amazon, where women are hoping to make their way to the top. Currently still governed by a man's world, the corporate ladder stands firm with their women's backs on it. For a company as large as it is, for an online delivery company that is the largest in the world, Amazon women are smaller than big at the top. I guess I'm making a point to consider. The gender battle in the corporate world is egotistical and, a question by women must be asked, “What can’t I do?” If wanting to become an Amazon woman, the item fits well if requested at the very start of the process.

As a precursor to women and the leadership they bring, I must say, I have, in my many years of experience in the corporate world:

seen decisiveness of process orientation and most importantly, a diehard need to better the environment and surroundings of the workplace.

These come from women expeditors and the representation of the amazon race of diehard women warriors in the work universe. It may seem, I am an activist and front leader for women intellect and women vision. Yes, I am; I said.

Much has been written in volumes overloaded with examples and continue to showcase from strength to strength and statistics in submissions like 'the most influential women in the corporate world" etc. NOT ENOUGH! We need to move from 'Think Big' to 'Think Bigger.' Its EE, Equal Entitlement, in thought, deed, and opportunity. Amazon, the company, has excellent stats to show for its women force almost as if it owns the phrase, “May the force be with you” and mean it!

The title of this article suggests two things, in case you're wondering where I'm going with this — obviously, it's revisiting with leadership and women in leadership roles. I'm trying to connect the fantastic leadership principals of Amazon, believingly the earth’s most customer-centric company, with warrior women in the workforce. For the platforms and performance combined, these principles make the path more accessible for women to get to the top. Its mandatory every employee knows them by heart and hold it in the palm of their hand. All 14, I’ve just revisited, which protects the employee from going off the given accomplishment track. So, when I read a posted comment and I quote and paste on here, I looked deeper into it – "Sounds like a formula for success and unhappiness. Missing are any principles that protect employees, promote a healthy work culture, or place employeesatisfaction of any kind above the bottom line.” Brad. Well, success and protection for the employee will come through his/her customer when he/she puts his customer first and beyond everything else. The old school mantra, 'Customer is King," has't changed nor will it ever. What Brad posted is not what it seems or reads, which brings me to visit the first principle, 'Customer Obsession.' I believe, that if you give a woman a customer, she attaches a DNA thread of hers to it and grows her family! In my opinion, there is no better leader than a woman leader to drive diversity and inclusion in large corporate environments. On behalf of my sisterhood, I can say, given these Amazonian principles in the 14 containers, women will lead to the whole of the common good. I am not sure how these principles were picked to be "The 14" by Amazon, but I do believe there aren’t enough CEOs or those in leadership roles, which follow even half of these. It wouldn’t be hard to prove, maybe even at Amazon itself! At this point it's hope then, the Amazonian woman will grow their pool and become prominent at the top, now that it’s all laid out for them.

Leadership matters. It's enormous, in my mind. In three decades of experience in the corporate world, I had more of managers, bosses, and the like including myself in several of these roles. It sucked! Damn bloody awful! Lacked vision sans leadership, it was hard to follow. Corporate wars are a battlefield where captive leadership drains and sap energies of its workforce. Sad but true. Horror stories run ahead of the "Stronger Together" kinds. The zombie ones are funny when everybody does what "Simon Says" and innovation is a word never worthy of its outcome. Creating fear and acting with authority, packed with inferior and superior complexes was /is a weapon still in use by the so-called leaders. Far from it all today is the 14 principals that make turning mission and visions a reality! Bezos nailed it, for sure! For the women aiming for the Amazon skies, the path has been laid out for them to arrive at the pinnacle of their careers and with the understanding that you don t get there alone. By this, I mean, Bezos is a sponsor for every one of his stakeholders and stakes his reputation on them. Now onward to the third of my favorites of the 14 principles, “Ownership”!

"Leaders are owners," says the principle of ownership. It is the one single humble truth that is the core and trait of a leader. They take ownership of the good, the bad, and the ugly. They never fire from another shoulder. Never. Always accountable. At Amazon, it's accountability "The Amazon Way" and the women all wrapped up in diversity and inclusion will create that circle of ownership because it's the shortest way to the top. As a woman leader, I too was most empowered by taking ownership to the end, but it took a tad longer for me. For the Amazon woman, she gets that on a platter along with the rest on day one itself. The Amazon woman becomes her “sister’s keeper" via the ownership she takes of the hood within, to do precisely that. Taking ownership is the biggest ticket to becoming a 'Changemaker,' a role I dream of, and I try hard to implement in the tasks I'm in. No doubt, breaking boundaries comes from taking ownership. As leaders, environment, social initiatives, and sustainability of human rights is the focus, is the goal, is the action, and it all comes from taking ownership. It's such a 'WOW" thing!

As we move from one opportunity to another, it's the impact we leave behind that matters and creating legacies that convert to a significance that in turn, can be recycled for the long term, is what is fulfilling for the right leader.

Feeling as I do on the last words as I write, it gives the Amazon woman within me the need to retake the vows, to build muscle to the brain and heart, to lead with compassion, to be a warrior with uncompromising integrity and envision to live by all the standards of excellence. In short, this may all sound what reflects the best of UPS and General Dynamics, but to be influential, my sisters, go back to the top! Hey Alexa! Take me there! 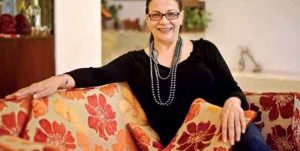 Journalist, Writer, Orator, Senior Consultant in Leadership and Communication, Actor, Producer, Activist – An Empowered Women in quest and fight for needed causes and campaigns. She is based out of both the US and India.