The advent of summer and the monsoon rains are also harbingers of the holidaying season. The north-eastern parts of India offer varied tourist friendly destinations which are equally pocket friendly. Meghalaya is one State which offers some really unique spots that promise both adventure and relaxation to the visitors. Like many other holidaying folks, I along with my husband, son and nephew, zeroed in on the picturesque hamlet of Mawlyngbna for our summer trip last year. This beautiful spot is nestled in the East Khasi Hills above the plains of Bangladesh.

In mid July 2018, we set off for a short vacation to Mawlyngbna, located at a distance of approximately two-and-half hours from Shillong, depending on road and weather conditions. Having made an overnight stay at Barapani, we commenced the journey in the morning and arrived at the village of Mawphanlur which is popular for the Sacred Grove after about an hour or so. Taking a much needed tea break, we drove on through the lush green surroundings. The drive itself was memorable with the clouds almost touching the ground at certain spots. Visiting this place during the monsoon has a charm of its own as the entire landscape puts on a fresh look which is of course missing during the dry season. After about two hours of driving along the winding terrain, we reached Mawsynram and grabbed a quick lunch. On enquiry, we were informed that our destination was just 20-30 minutes away. 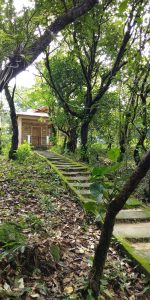 Finally at around 1 pm, we arrived at the Traveler’s Nest where we had already booked a cottage for overnight stay. This tourist guest house is situated at a hillock overlooking the quiet hamlet and also offers commanding a magnificent view all the way into Bangladesh! It is run and managed by Mawlyngbna Multipurpose Co-operative Society Limited and there are quite a few local youths who are involved as guides and caretakers. We received a warm welcome from a couple of such young boys who were in charge of the place. Traveler’s Nest was inaugurated in 2014 and by July 2018, there were two twin-bedded cottages ready to accommodate guests while a third one was under construction. There is also provision for camping in the vicinity for the more adventurous tourists but it is advisable to book cottages during the rainy season. The young lads, Batista and Pynskhemlang, explained to us that since it was early afternoon and we were already done with lunch, there was enough time to take the trek to Lew Luri Lura which is one of the highlights of Mawlyngbna.

The trek to this unique location takes around 1 and half hours for amateur trekkers like us. We followed the trail under jungle canopy, through gurgling streams and even a waterfall. The trek is challenging for first timers and it is essential to wear appropriate gear for the same. Having to cross a concrete dam built to channelize a waterfall looked daunting but our guides made it easy for us! After an exhaustive trek, we finally arrived at the breathtaking seat of a popular Khasi legend. The overpowering fatigue soon disappeared as we surveyed the plateau of rocks and greenery that seem to extend endlessly. There are innumerable impressions on the rocky surface of the area that resemble animal footprints.

Our guide narrated the folk tale of Lew Luri Lura or the Market of Chaos while we sat on the rocks and listened intently. Legend has it that this place was a weekly trading centre where animals could meet, talk and exchange goods brought by them at the market. It is believed that the remnants of the pug marks can still be seen at the site. Around this picturesque open space there is the river Um Syntai whose gurgling water is music to the ears. Besides the river, the waterfalls in the vicinity namely Um Diengkain and Ar Phalat are breeding grounds for a variety of fish. We stayed for almost an hour, exploring and trying to capture the uniqueness of the place before heading back to our camp. On the way, we came across plenty of pitcher plants which grow abundantly in that region. After an early dinner we retired for the night. 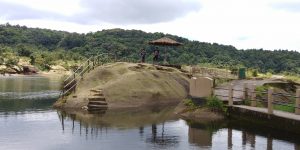 On the next morning which fortunately was quite sunny, we explored few other popular tourist sites of Mawlyngbna. While we were having breakfast, one of the caretakers brought a glass box which contained some fossils of starfish and similar marine life. He informed us that these are quite common in the area and hence they have kept some for display for the visitors. In fact, there is another trek which takes people to the spot where these fossils are found. Since we had time constraint we could not take that trek.

After checking out of Traveler’s Nest, our guide took us to another trekking point, Mawsiangjroi, which is famous for the Split Rock. A very huge rock which is actually split from top to bottom is a unique sight and the trek begins at the foot of the rock which leads to a very narrow cave, hence it is quite challenging and recommended for professionals. We made a hurried tour of the place and then proceeded to the tranquil water reservoir, Um Khakoi. The lake is popular for kayaking and we saw a few enthusiasts enjoying the activity. The place has a serene ambience and we soaked in some peace there just lazing around.

Finally we took a quick tour of the village, hopping into a few small shops for local goodies. Our guide let us know that there are various adventure activities at Mawlyngbna like caving, zip-lining, mountain biking, angling, river trekking which includes canoeing, etc. Caves such as Krem Mawpun and Krem Pamskei are situated nearby and often frequented by trekkers. The world’s longest sandstone underground cavern, Krem Puri, is only 13-14 kms away. In addition, one can take treks to the waterfalls like Riam Khasaw and Phew Phew which needs around 3-4 hours to cover. Usually caving and zip-lining activities are suspended during the rains.

All said, Mawlyngbna is undoubtedly one tourist destination in Meghalaya that one should not miss out on. Only a few hours’ drive from Guwahati, it is truly a rejuvenating getaway. This quiet and beautiful village in the East Khasi Hills has a lot to offer and will surely steal the visitor’s heart.