Jamnagar has the country’s first national marine park since 1982. This is one of the rare places in the world where one can look at corals without having to dive down into the water. One just has to walk in the water, in places when the tide ebbs, in about 1 to 2 feet of water and watch the fascinating underwater world of corals.

I had seen corals by doing snorkelling or underwater walking in many places like Phuket, Bali, Maldives or the Gulf of Maxico. I am really fascinated by looking at those beautiful coral underneath the sea. So, on my visit to Jamnagar when I heard about this corals available in nearby Marine national park, I wanted to see them again. But it seemed to me a little bit scary. Because one can see the corals by walking on the sea only during the low tides. What would happen if the tide timings changed?? Many other questions arose in my mind as I went to Jamnagar Marine office to collect the necessary information. The officer on duty was kind enough to encourage us to see this Marine National park with full enthusiasm and assured us about the tide timings etc. The information we gathered from him were that there are four tides in a day - 2 high tides and 2 low tides. High tide occurs every 12 hours and the Coral walk is done in the dry spell between 2 high tides. Generally it takes 3 and half hours for tide to reach the highest point on any given day and same time is taken for the ebb.

Over phone the officer contacted the office at site and arranged a guide for us. Accordingly, the next day we headed for the park very early in the morning. The sun was about to rise in its full glory. The park is situated at a distance of 60 kms from Jamnagar on the way to Dwarka. On the way we saw many peacocks in the field area and near to the park we found a few man-made water bodies. We were astonished to see beautiful flamingos all over the place. It was really a breathtaking view to see those colourful flamingos. With pink and white colour all over their body, they were walking very gracefully on the water body in search of their morning breakfast. We also saw other beautiful birds like kingfishers. 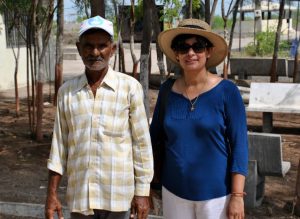 Our car stopped at the gate of Narara Marine National park and we were greeted by Akbar, our guide to help us visiting the park. Akbar lives in a nearby village and he knows all about the place and is very confident about the tide timings. Following him, we started our adventurous journey to see and enjoy the corals and under sea creatures. It is pertinent to note that unlike other sea corals or creatures, the corals and creatures living in this region undergo very rough environment as they have to undergo different environment under complete sea water during high tide period and expose to sunlight during low tide period two times a day.

Walking down a few meters, we landed into swampy areas. The area is full of mangroves and we could see beautiful greenery coming out of exposed brown roots. We saw lot many white coloured small crabs all over the moistened muddy area. Seeing somebody entering their domain they ran all over to enter into their holes. So we saw them running all over the place.

The area in front of us was a huge muddy, water-filled area. In a very distance we could see the dark blue sea touching the blue sky. We could hear the roar of the sea. Akbar informed that during high tides the area where we stood would look like that blue sea!! Talking to Akbar we were walking along with him. Slowly we entered into water area dipping our feet few inches under water. We saw Akbar going here and there in search of corals or sea creatures as he knows where they reside and called us to see them. Accordingly we could see different colourful corals dancing under little water sparkled with sun rays. We saw different varieties of sea creatures like sponges, octopus, puffer fish, sea turtles, crabs, ray fishes, jelly fish, star fish etc and exotic marine flowering plants. When we met those sea creatures, Akbar used to pick them up and showed to us and told us to touch or take it by hand. He even guided us to pose for photographs with them. Then very carefully he put them in their respective places from where he picked them up. With his inspiration I took many of them in my hand and had them photographed. It was really a fulfilled and enjoyable moments for us to play with those sea creatures in open sea water under open sky. A few of those moments are still alive in my mind.

Once we saw few small octopus and he picked up one and gave it in my hand. He even suggested taking one of them on my cheek and taking a photograph, which I really did it! In another incident he picked up one fat colourful fish and gave it to me. The fatty fish very nicely sat on my palm but very rebelliously sounded making his point that he is not at all comfortable with us. After taking photograph, Akbar told me to keep the fish in water. Accordingly I placed the fish in water and that fellow started floating on the water looked like as if he is dead. I got shocked because I had taken him on my palm for only a few second! Akbar smiled at me and told that although he does not know its scientific name but they call the fish as ‘Dhoongi fish’ because that particular fish pretends as if he is dead when somebody touches him! And yes, to our surprise, after sometime that fellow started swimming again! I still remember the photograph I posed with that dhoongi fish! Few sea creatures are really difficult to take it by hand because of their look or shape. But I couldn’t refuse Akbar because of his enthusiasm and I took photographs with them keeping my eyes closed. It was indeed a nice experience to walk down in the water and see those corals and sea creatures live very closely.

I remembered a very nice blue coloured big crab whom I saw from very near, who must have been taking sunbath near his house during that time. Hearing our sound that fellow got very angry and very furiously he went here and there as if he is protecting his home and family from us with water popping up from his nose. The scene really amused us a lot and I can never ever forget that scene in my lifetime.

We found Akbar to very knowledgeable about the corals, sea creatures found in that place and as a regular guide he knows where those can be found out and he took us to those places to see them and to experience them. Going with him we almost reached the dark blue sea where the swampy area ends and meets the sea. A typical sea with white vigorous waves with roaring sound was just in front of us. We met few local people there who were in search of fish in the early morning. We felt the water under our feet started getting strong waves. Looking at the surrounding it seemed we were in the middle of the sea surrounded by water everywhere. It was really surprised to know that unknowingly we covered such a long distance!

Akbar now took his path other way around and we started our return journey. The sun was coming up well in its full form and we could notice the water bodies in front dancing and sparkling with the tune of sun rays. It was really a marvellous scene and we enjoyed it to the fullest.

Amidst sea water we slowly started returning back. This time nobody was talking and we enjoyed the silence and we only heard the musical roar of sea water at a distance mixed with sounds of water bodies underneath. It was really an unforgettable experience.

We reached the office area of the park and we met a few officers there. We thanked them for providing us with the opportunity and for arranging such a beautiful trip with a nice guide Akbar. We thanked Akber from the core of our heart as he made our day so memorable. Yes, of course, I didn’t forget to have a snap with him before saying the final “bye” to him.