A Vision for an Empowered Assam

Is it luck that shapes a person’s destiny or is it hard work, dedication and perseverance that ultimately count? The fact remains that success comes to only those who believe in themselves and their dreams. And who proves this better than eminent Assamese activist and entrepreneur Manoranjan (Mark) Bordoloi? An unassuming visionary person, he has travelled across the seven seas from a small town of Assam to become a highly sought after technocrat and entrepreneur in the United States with interests in diverse fields. Besides his personal achievements, the fact that make him stand out from the crowd is his commitment to give back whatever he has got in this lifetime to the people from his own native land.

“You can take me out of Assam but you can’t take Assam out of me,” so begins Manoranjan Bordoloi, popularly known as Mark Bordoloi, as the mélange team calls him last week for a telephonic interview. And rightly so. Manoranjan aka Mark has climbed the rugged steps of success to be counted as one of the top ranking entrepreneurs in the United States of America. But at the same time, his vision throughout his journey has been to work towards the betterment of his people back home and also for the uplift and promotion of the State’s rich socio-cultural heritage. 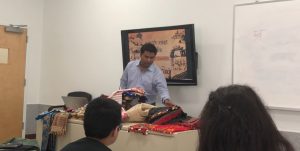 A “progressive” entrepreneur as he likes to introduce himself, Mark Bordoloi has been working in the field of data processing and IT industry for more than 25 years now. In 2008, he shifted to USA where he gave birth to Ekodus Inc, a New Jersey-based Information Technology and within a very short span of time, he took the company to the pinnacles of success. The company was listed in INC magazine as one of the fastest growing companies of the US in 2014, besides being acknowledged by the Diversity Business Group as the fastest company in New Jersey. Not just IT, he has also made a mark by opening a chain of Indian restaurants across the United States.

Mark’s endeavour to promote the culture and take the people of his own State along with him is exemplary. While his company’s entire staffing division is located in New Delhi, he has also played a pivotal role in the promotion of Assamese culture and tourism in the West, besides facilitating the performances of a number of prominent Assamese artists in the US.

At present, Mark is busy with the implementation of two new B2B and B2C services – YMOC.COM and Oirabot – in India and the US. While YMOC is a online meal ordering portal launched across pan India, Oirabat is a one-of-its-kind Artificial Intelligence-enabled Chatbot aimed at closing the gap between various stakeholders in the healthcare interface of USA. A technology which is still being developed in the Guwahati Development Centre of Ekodus, Oirabot has its target customer base in the USA. 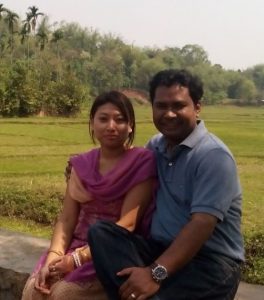 In his recent discussion with mélange, Mark talks about his journey so far. Following are excerpts:

Ans: I was born in a small village named “Mekurikuchi” in Rani (near Azara) in Kamrup district. I grew up in Azara and started my schooling at Dharapur. I passed my matriculation from Azara RBHS School. Actually, my mother worked for the Block department while my father worked in the agriculture department of the Government of Assam. So, we had to move to Government quarters from Rani to Dharapur. I have spent my entire growing up years at Dharapur. I attended Dharapur MV School, Dharapur High School and then Azara RBHS School after which I completed my secondary and graduation from B. Barooah College, Guwahati.

While growing up in the pristine lap of nature in Assam, I participated in various sports, including football, cricket and Badminton. I won various essay writing competitions too. In fact, I wrote poems and a unpublished novel, named “Bhagoruwa Vastav”. I do not have the script of the novel now but I still remember the story. I will try to recollect the same and write it once again in the future.

Ans: Instead of the term “successful entrepreneur”, I would like to call myself as a “progressive entrepreneur”. As I already said, my parents used to work for the Government of Assam. What I learnt from them was to be dedicated and serve the needy. My mother used to take me to the various developmental centers where women came to see my mother for suggestions. In fact, as a Gram Sevika, my mother used to teach rural women how to cook nutritious meals in a hygienic environment. It was a “feast moment” for me whenever my mother took me to these centers. Similarly, my father was the most disciplined and punctual person at work. I think, I have learnt most of life’s lessons from my father. My father won the hearts of the farmers and he is actually a “Farmer’s Person” in the truest sense of the term. I learnt an important message from my parents i.e. “Never lie to yourself and serve people ruthlessly”. This is how I learnt to serve people.

I have always dreamt of achieving the good things in life. At a very early stage, I learnt that I have to do business to earn good things in life. My grandfather’s family was in the business line and they used to operate transportation buses in the 80s. We used to say, “We run Bordoloi Poribohon (Bordoloi Travels) from Nowgaon Town to Kampur”. Somehow, business has always been in our blood, at least from our grandfather’s side.

After my graduation, I moved to Delhi for Higher Education. I completed my PG in Advertising and communications Management. I was lucky to find my mentor at the very early stage of my career at Thompson Press, Noida, UP. I was given training into all Typesetting workflow as a Production co-ordinator by Joseph Vargese. I realized then that the publishing industry was going to be my career. It was during that time I started my data processing company in Delhi. I used to work for domestic clients. The company started doing good and I was able to acquire my first project from a USA based company. This is how the thought of shifting to USA started entering my mind. When I got the chance to travel to the USA, my first plan was to meet the client first for whom we have been working. By god’s grace, I was successful there.

I got my work authorization in the year 2008. I started working to set up my company concurrently. And this is how the entrepreneurship sage in the United States begun. I started the company at the time when the country was going through recession. You will not believe it but the very first employee of the company has been working with us since then. I was able to take the company to INC magazine’s fastest growing companies in 2014 and was also awarded by the Diversity Business group as the fastest growing company in New Jersey.

I have also been trying my hands into diversified businesses. I started my restaurant chain also which I later stopped focusing to grow my other business interest. 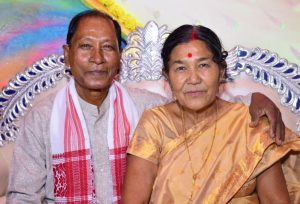 Ans: I must say that ‘you can take me out of Assam but you cannot take Assam out of me’. Right from my childhood days, I have been very social. The United States is my Karambhumi (workplace) now, but I always want to do something better for my Matribhumi (motherland). I have been giving my time up to my full capacity to promote my matribhumi. I got a chance to give a presentation about “Tribes in Northeast India” at the Sri Srivenkateswara Temple in New Jersey. I have been participating in various social activities to promote Assam and the Northeast. I have been speaking with the Assam Tourism department about how we can promote our rich culture and create a awareness among the global audience. Yes, given a chance, I will be able to dedicate my time to promote Assam Tourism here in the United States.

Ans: Yes, Sometimes I feel proud that I was the first person to organize Papon’s first ticketed singing show outside India in the year 2014. It was during the Assam Convention held in New Jersey. I try to promote new artists. My father used to act at local theaters when I was a child. I grew up watching stage rehearsals and then the final drama performance during the Durga Puja season. So, I still have a soft corner for the cultural side of life.

I feel that we Assamese are blessed with a lot of resources but, at the same time, we are not resourceful. By now, we should have been able to come out into the global platform and take play a leadership role. We need leaders to take forward our rich heritage in the global map. I will always put my best foot forward to help or take part in every way to promote my motherland.

MB: Ekodus is actually a subsidiary company of our USA based Ekodus Inc. Yes, the India head office is based in Guwahati even though we have our US IT Staffing division in Noida, UP. Ekodus is an Information Technology investment company.

Apart from other services portfolio, Ekodus has two own B2B and B2C services – YMOC.COM and Oirabot. YMOC.COM stands for Your Meal On Call. It is basically an online meal ordering portal. We proudly say that YMOC.COM was born in the USA but raised in Guwahati. We plan to add all restaurants and make their menu available for online customers. On the other hand, Oirabot is an Artifical intelligence enabled Chatbot. Through Oirabot, patients will be able to book, schedule, cancel and reschedule their Doctor’s Appointment over the phone. Oirabot is still under development at our Guwahati Development Center. Oirbot has its target customers in the United States at this time.

Ans: Communication and accessibility of information to the general public are very important. If we keep everything within the community and other states, we will have limited scope of growth.

First and foremost, the State governments should bring the Non-Resident Indians into confidence. Many NRIs like me are always keeping alive our dreams to do something for our motherland. The governments should open up more lines of communications. The NRIs need good partners in the form of home grown entrepreneurs who can be an extended help. This will develop an entrepreneurial movement in our states. If we trust ourselves, then we will be united and strong. You know that any community which is united and strong is successful worldwide. This will enhance our global reach!

Ans: I am married to Gitika Boro Bordoloi who lives with my family in Guwahati and who runs the Guwahati incubation centre of Ekodus Inc.